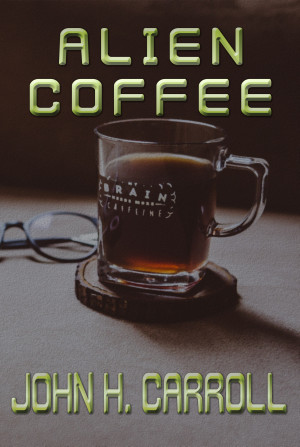 By John H. Carroll
Rated 5.00/5 based on 2 reviews
Jillian keeps trying to drink her coffee, only to find the cup empty. However, she is NOT the one drinking it. It frustrates her more and more with each passing day until she finally discovers exactly what has been happening.
Aliens, coffee, emo bunnies, snails, teenagers and a Colombian drug lord all take part in this humorous sci-fi romp. It’s hard to tell which is the worst. More
Everyone knows aliens secretly live on Earth. What isn’t known is how much they like coffee.

Jillian lives a peaceful life amongst the trees and mountains of Northern Idaho. However, she keeps trying to drink her coffee only to find the cup empty.

When she discovers who has been drinking her coffee, it takes all her willpower to hold onto her sanity. The revelation leads her on the most exciting adventure of her life. When she learns about emo bunnies and the true purpose of snails, it occurs to her that her sanity may be lost forever.

A Colombian drug lord has an alien problem of his own. To make matters worse, the aliens are teenagers.

Haha! Love it! This really was a fantastic and entertaining read!

What a GREAT story!! I Loved it! This is a very well written quick read - but not too quick. Engaging characters (and BOY are they Characters!) and a cute story make for a fun little romp. I Definitely recommend it for a FUN time!

You have subscribed to alerts for John H. Carroll.

You have been added to John H. Carroll's favorite list.

You can also sign-up to receive email notifications whenever John H. Carroll releases a new book.