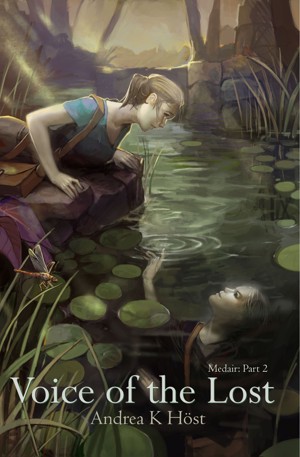 Voice of the Lost : Medair Part 2

By Andrea K Höst
Rated 4.00/5 based on 1 reviews
The conclusion of the story begun in "The Silence of Medair".

Medair an Rynstar wants only to leave. After aiding the descendants of the Ibisian invaders, she knows that to thousands she is hero-become-villain. Hated, hunted, lost.

She has learned that you can never to return to your past, or run from the consequences of your actions, but can she find a way to live in defeat? More
Medair an Rynstar wants only to leave.

Five hundred years after the Empire she served fell before the Ibisian invasion, Medair has betrayed her Emperor's memory by helping the descendants of the invaders. She knows she will be reviled, that to thousands she is hero-become-villain. Her one goal is to return to the hidden cave where she slept out of time, and hope that she wakes in a world where the name Medair an Rynstar has been forgotten.

Assassins, armies, and desperate magic complicate Medair's plan of escape, leading her inexorably to face the very people her choice has cost the most. She has learned that you can never return to your past, or run from the consequences of your actions, but can she find a way to live in defeat?
Available ebook formats: epub mobi pdf rtf lrf pdb txt html
First 50% Sample: epub mobi (Kindle) lrf more Online Reader
pdb
Price: $3.99 USD
Buy Add to Library Give as a Gift
How gifting works
Create Widget
Tags: fantasy romance high fantasy australian author australian fantasy
About Andrea K Höst

About the Series: Medair

What does the fated heroine do when she fails to save the Empire?

Voice of the Lost is the perfect sequel to The Silence of Medair. The first book is a political fantasy that’s epic in scope, and Voice continues to develop the themes of colonialism, empire, and sacrifice and a controversial romance is set in motion. Medair chooses to side with the descendants of her invaders while facing an oncoming apocalypse brought on by wild magic. Talk about raising the stakes!

I loved this book, and it has the strengths of The Silence of Medair, but with a slightly different focus. It’s still character-driven, but there’s less brooding introspection and more political intrigues. Medair is thrust in the midst of a war and makes tough choices, possibly earning her place as a villain in history. What makes it interesting is how she deals with it, and how she views heroism, sacrifice, and ethics in herself and the colonizers. Medair’s character development is one of the best I’ve seen in the fantasy genre.

I must commend the author for how she handles magic in the world-setting. Magic systems are best explained in some books, while in others, it’s best left as a mysterious force of nature–whichever helps the suspension of disbelief. Höst treats it as the latter, and it works. Magic is a messy thing in this world–it merges parallel worlds, triggers a looming apocalypse, and even changes people’s ethnicity–which is a big deal in a historical reality of heated colonizer vs. colonized dynamics. While those are all crazy, its believable because the emotional consequences for the characters are so real, and that’s the key achieving verisimilitude in fantastical literature. I don’t know how the author pulled it off, but she deserves mad props.

With sacrifice as a key theme, it mostly reads like a tragedy. Whenever I cheered for the small victories, things became infinitely worse, but none of it came off as melodramatic. I was on the verge of tears in some parts, unable to decide whether it’s best to read on (and feel that screwdriver to the chest) or put the book down (and be unable to think of anything else!).

Medair’s internal dialogue sometimes summarizes what just happened and her reaction to it instead of only the latter, and it’s a little redundant. But other than that minor quibble, there’s nothing I’d change about the book.

It’s rare to find an epic fantasy that’s ambitious in scope and yet ties the story together succinctly. There’s no filler subplots or unnecessary scenes, it hits hard but ends with a satisfying conclusion. The story is emotionally involving and deals with heavy themes, but it’s worth it. I highly recommend this duology if you’re looking for an epic fantasy that’s character-driven, different, and thought-provoking.

Note: A free review copy was provided by the author.