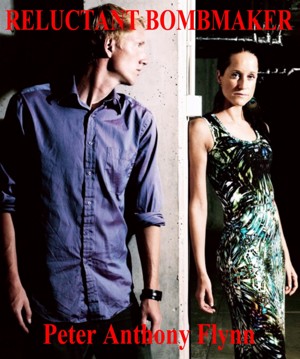 In LA, a tech-savvy American man and a Muslim exotic dancer are held hostage under cruel circumstances to make bombs for a newly-awakened domestic terrorist cell. More
RELUCTANT BOMBMAKER is a suspense thriller screenplay.

In LA, a tech-savvy American man and a Muslim exotic dancer are held hostage under cruel circumstances to make bombs for a newly-awakened domestic terrorist cell.

The American is Harkin, a shy, computer-savvy loner, who is dragged to a gentlemen’s club by his office buds and becomes surprisingly infatuated with Eva, a beautiful Arabian exotic dancer. After a lap dance with her goes embarrassingly wrong, Harkin splits through the back door. Eva runs after him, but is kidnapped by some mysterious men in a white van who get away. Harkin thinks one of the men sees him. For days he remains paranoid suspecting all white vans are out to get him. His paranoia becomes real when the mysterious men conduct a home invasion robbery and take him away as a hostage.

Thereupon, he is shuttled with Eva among three hideouts as the secretive men divulge the details of their diabolical scheme. When their bomb maker is captured in a Homeland Security raid, Harkin is ordered to take his place. When he refuses, they threaten to mutilate Eva, but Harkin offers himself instead. What follows is not only his fight for survival, but a quest to save Eva, the sheik and create an unexpected surprise for the perpetrators.

Peter Flynn was born in Boston, MA and raised on the east coast. He graduated from Thayer Academy and received a BA from Hobart College before entering Columbia University School of Architecture. However, Peter soon fell in love with film and theater and transferred to the Department of Film. He continued to live in New York City where he wrote and directed two theatrical shorts, “Won’t You Join the Dance” and “Angel of Death,” shot documentary camera for Martin Scorsese’s “Street Scenes” and worked in commercial film and Off Off Broadway Theater in many production aspects. In particular, he was Technical Director and Lighting Designer for the acclaimed Solaris Dance Theater Company, funded by the Rockefeller Foundation. Moving to Los Angeles in 1982, he became the Artistic Director of the Fig Tree Theater, an equity-waiver theater in Hollywood (now called the Hudson Theater) which received 15 Drama-Logue Awards during his five year tenure. He was a Senior Show Artisan for Walt Disney Imagineering which designs and builds the popular ride attractions for every Disney park in the world. Highlights included being the co-lead on the scenery construction and installation of two world premier ride attractions at Tokyo Disney Seas based upon the Jules Verne classics “Twenty Thousand Leagues Under the Sea” and “Journey to the Center of the Earth.” As listed on IMDb.com, Peter was the Art Director on two Roger Corman productions, and has worked as a propmaker on a long list of features and TV shows including “Tremors,” “Terminator 2” and “Pirates of the Caribbean 2 & 3.” He also wrote and directed a feature film “Project Vampire.” He has been a long-standing voting member for the Saturn Awards with the Academy of Science Fiction, Fantasy and Horror Films. Peter now writes screenplays full time specializing in the science fiction genre. Peter can be reached at pixman@rocketmail.com

You have subscribed to alerts for Peter Anthony Flynn.

You have been added to Peter Anthony Flynn's favorite list.

You can also sign-up to receive email notifications whenever Peter Anthony Flynn releases a new book.