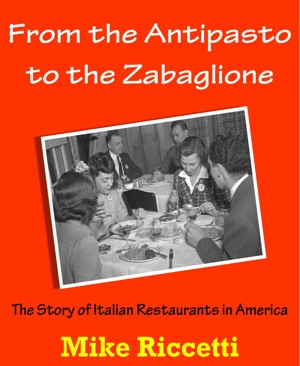 Italian restaurants have been more influential on the dining habits of Americans than most realize. Italian restaurants have introduced foods and dishes, and codified Italian preparations for diners and home cooks. The osso buco, veal Parmesan, saltimbocca, Caesar salad, tiramisu and many others you might have prepared at home are not the result of any Italian home-cooking tradition but are dishes that first appeared in restaurants and made the transition to the home kitchen. The restaurants at the cutting-edge – the focus a fair portion of this story – have introduced dishes and products that are imitated and translated by the other establishments. It might take a decade for their creations that have struck a chord with the public to filter all the way down, maybe less in this hyper-connected world, but the famed, truly innovative restaurants usually have an influence well beyond the customers they have served. The direction of Italian food in this country has been set largely by these places.

Mamma Leone, Gennaro Lombardi, Romeo Saltalamacchia, Mauro Vincenti, Piero Selvaggio, Tony Many, Pino Luongo, Lidia Bastianich and Mario Batali are just a few of the featured players, a list which also includes some distinctly non-Italian names like Wolfgang Puck and Michael White. The widely researched, if succinct, From the Antipasto to the Zabaglione tells the tale of this enjoyable subject in properly engaging fashion.

Mike Riccetti is a Houston-based food writer who has written three editions of the popular guidebook, Houston Dining on the Cheap - A Guide to the Best Inexpensive Restaurants in Houston. For a few years, until the position was eliminated, he was been the local editor of the Zagat Survey, and has been a significant contributor to other guidebooks. He is also the co-author of The Guide to Ridiculously Easy Entertaining. A longtime Houstonian, he has degrees from The University of Texas at Austin and Cornell University, and blogs regularly about dining and imbibing in one of the country's great restaurant cites, Houston, at his eponymously named website at MikeRiccetti/blog.

You have subscribed to alerts for Mike Riccetti.

You have been added to Mike Riccetti's favorite list.

You can also sign-up to receive email notifications whenever Mike Riccetti releases a new book.