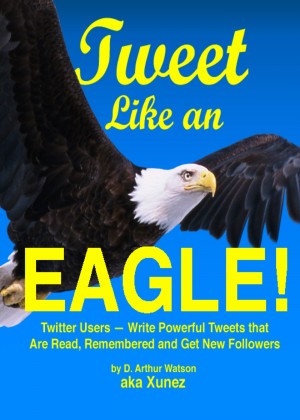 D. Arthur Watson, username Xunez on Twitter, was born in Chicago and grew up in New Jersey. He graduated from Lehigh University in Bethlehem, Pennsylvania, with a BA in English Literature.
His writing career began as a copywriter for Prentice-Hall Publishers in New Jersey. From there, he moved on to work as a copywriter in the Book Club Division of Doubleday & Company in Garden City, New York, where he later became Editor of the Science Fiction Book Club. He currently lives in Alabama.
In 2010, Twitter reignited his interest in writing. The discipline of the 140-character limit is a marvelous teacher. His future writing interests include novels, flash fiction and poetry.

Thanks for this book, it has cleared up quite a number of things and has shown me where I have been falling down recently on my tweets. This book is always very well written it is clear that the author took their time to provide the quality information.

Not a bad read, some useful stuff for newbies.

You have subscribed to alerts for D. Arthur Watson.

You have been added to D. Arthur Watson's favorite list.

You can also sign-up to receive email notifications whenever D. Arthur Watson releases a new book.