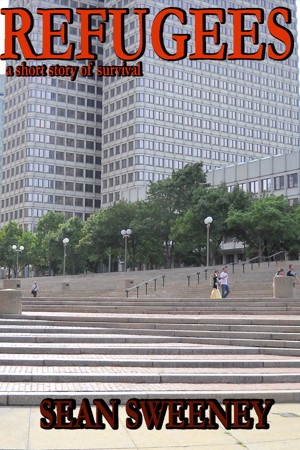 Refugees: A Short Story of Survival

The Yellowstone Caldera has exploded, and survivors who fled the devastation made their way east. Cities such as Atlanta, Boston, New York, Philadelphia and Washington, D.C. prepared for their arrival. It meant rationing – and rational thought. People on both sides would face tests of their nerve and resilience.

Only those with strong nerves would survive.

Sean Sweeney’s love of reading began in 1988, when he was handed J.R.R. Tolkien’s classic The Hobbit, and was given a needed boost with John Grisham novels and the Star Wars Expanded Universe. His passion for writing began in 1993, as a sophomore in high school, when he began writing sports for his local newspaper. Born and raised in North Central Massachusetts in 1977, Sweeney has written for several newspapers and radio stations. When he is not writing, he enjoys playing golf, reading, watching movies, enjoying the Boston Red Sox, the New England Revolution, Arsenal F.C., Gold Coast F.C., and playing with Caramel The Wonder Cat.

A bit too short - we start to care about the characters, and it's over. This would be better as a whole book.

You have subscribed to alerts for Sean Sweeney.

You have been added to Sean Sweeney's favorite list.

You can also sign-up to receive email notifications whenever Sean Sweeney releases a new book.