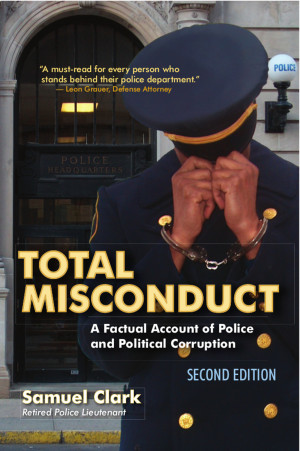 By Samuel Clark
When Lieutenant Samuel Clark was a supervisor with the Newark New Jersey Police Department, he discovered widespread systemic police corruption. Shockingly, high-ranking police officials protected several police officers involved in burglaries, and other crimes. This book presents precise details about the retaliation Clark endured, and the results of his efforts to arrest police corruption. More
While a supervisor with the Newark New Jersey Police Department’s Gang Intelligence Unit, Samuel Clark was attacked by another Newark Police officer and nearly choked to death. The officer who committed the assault on Clark was only sanctioned with a reprimand. Clark could not understand how an officer could receive such a lenient sanction for committing a serious act of misconduct. It prompted Clark to investigate the police department’s internal disciplinary system. Clark discovered that officers involved in thefts, assaults, burglaries, sexual assaults, and other serious crimes were being protected by high-ranking police officials of the Newark Police Department. Then too, police officers that attempted to report acts of misconduct were punished with false retaliatory non-criminal administrative charges. These honest officers were fired, or given harsher sanctions than officers involved in crimes.
Clark could not be silent about these shocking crimes committed by police officers. He wrote numerous official police reports complaining about these incidents. Instead of following the laws of New Jersey and conducting a thorough investigation of Clark’s complaints, Newark police officials retaliated by filing false administrative charges against Clark. Newark police officials demoted Clark from Lieutenant to Sergeant, and he was suspended without pay for 282 days.
When Clark returned to work after this demotion and suspension, he continued to make official written complaints about serious acts of police misconduct. Newark Police officials then sanctioned Clark with an “indefinite” suspension without pay. Six months later Clark was terminated for non-criminal administrative charges. Officials of the Newark Police department ruled that Clark was “incompetent and inefficient.” It is more than coincidence that three years prior to his termination, Clark addressed members of the Newark Municipal Council and complained about police corruption. In that address (on public record) Clark predicted that he would be terminated for incompetence.
Clark’s termination and demotion have been reversed and he retired. Presently he is working as a consultant and expert witness. He has worked with numerous honest police officers that have been victimized by systemic police corruption. Clark has not only worked with victimized police officers in Newark New Jersey, Philadelphia Pennsylvania, Greensboro North Carolina and elsewhere, he has also provided assistance to citizens and numerous firefighters also. Clark has testified before several governmental committees, schools, courts, churches, and organizations about police corruption and the inherent flaws of the internal disciplinary system.
The purpose of this book is to expose the extent of police corruption and the dictatorial power of police officials in the United States. A key revelation of this book is that police officials are protecting and rewarding cops who have engaged in serious criminal misconduct while subjecting police officers who obey the law to severe punishments. How can law enforcement agencies operate so lawlessly in America? It is this question that this book poses to the reader and seeks to address.
Available ebook formats: epub mobi pdf rtf lrf pdb txt html
First 20% Sample: epub mobi (Kindle) lrf more Online Reader
pdb
Price: $2.99 USD
Buy Add to Library Give as a Gift
How gifting works
Create Widget
Tags: police corruption political corruption crime biography whistleblower crime fighters internal affairs police crime police whistleblower
About Samuel Clark

You have subscribed to Smashwords Alerts new release notifications for Samuel Clark.