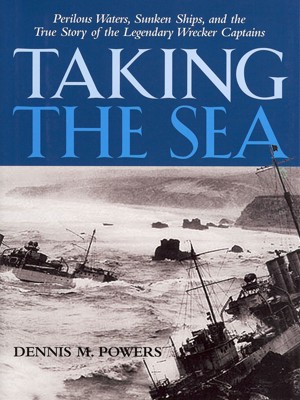 Taking the Sea: Perilous Waters, Sunken Ships, and the True Story of the Legendary Wrecker Captains

By Dennis Powers
This book showcases the heart-beating salvages and “wondrous death-defying finales” (Kirkus Reviews) by the important wreckers. Readers will see how innovation marched to change the maritime world, and as the most acclaimed wrecker, Captain T.P.H. Whitelaw, observed: “A terrible, always hungry monster, with long white teeth is the sea. A smiling witch one day—a monster the next.” More
“Kirkus Reviews” summarized: “Maritime historian Powers ("Treasure Ship" and others) offers a series of vignettes from the golden age of American marine salvage. It extended from the end of the Civil War to the decade following World War I. Sail was merging with steam, wooden hulls with iron ones, but as the nation expanded westward in the wake of the Forty-Niners, the burgeoning demand for commercial transport, in advance of creeping railroads, put all manner of ships to work under good masters and indifferent ones, for better or worse.

“While these stories cover disasters on the Atlantic and in the Great Lakes, Powers uses as the centerpiece the operations of Captain Thomas P.H. Whitelaw, an emigrant Scot who, beginning as a hard-hat diver in San Francisco in the late 1860s, founded a marine-salvage empire covering the California and Pacific Northwest coasts. These often-foggy waters teemed with reefs and shoals not yet charted, lying in wait for the inexperienced skipper out for easy money. Whitelaw, who had gone to sea at age twelve, saw the vast potential in wrecking and seized it with both hands, building a reputation for personal courage by often risking himself when crews and passengers were in immediate jeopardy on a vessel in peril. Many of these colorful Pacific stories are not well known--for example, that of “Dynamite Johnny” and the Umatilla, a diehard ship wrecked on its maiden voyage and five times subsequently.

“But while most shipwrecks tend to be similar--winds howl, seas crash, hulls crack--the native ingenuity of Whitelaw and his peers in raising vessels from the dead puts meat on the bones of the salvage stories…there are plenty of interludes blending tragedy and triumph, and a few wondrous, death-defying finales. (Kirkus Reviews)”

You have subscribed to alerts for Dennis Powers.