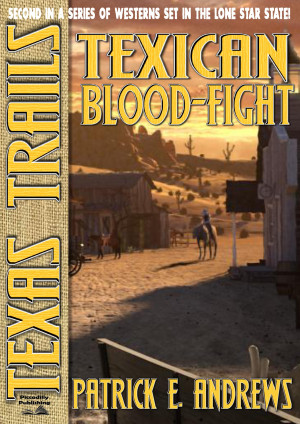 Patrick E. Andrews was born in Oklahoma in 1936 into a family of pioneers who participated in its growth from the Indian Territory and Oklahoma Territory to statehood. His father's family were homesteaders and his mother's cattle ranchers. Consequently, he is among the last generation of American writers who had contacts with those people from the late 19th and early 20th centuries. Patrick's wife Julie says he both speaks and writes with an Oklahoma accent.

He is an ex-paratrooper, having served in the 82nd Airborne Division in the active army and the 12th Special Forces Group in the army reserves. Patrick began his writing career after leaving the army. He and his better half presently reside in southern California. He has a son Bill, who is an ex-paratrooper and a probation officer, and two grandchildren.

About the Series: Texas Trails

This series consists of three novels set in the Lone Star State of Texas, featuring different characters and fast-action.

You have subscribed to alerts for Patrick E. Andrews.

You have been added to Patrick E. Andrews's favorite list.

You can also sign-up to receive email notifications whenever Patrick E. Andrews releases a new book.