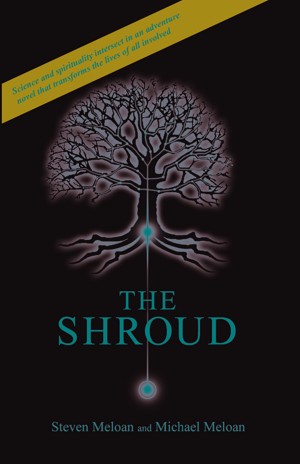 By Steven_and_Michael Meloan
One of the world's most controversial religious relics, an ancient spiritual order, cutting edge genetics, and a world torn by cultural and religious strife—all coming together in an adventure novel that explores the intersection between science and spirituality. More
It is the near future, and a genetic research team from the NIH is asked by the Vatican to use the latest findings of the Human Genome Project to shed new light on the authenticity of the Shroud of Turin. The lead researcher, Robert Strickland M.D., is an agnostic with spiritual leanings. But as the inquiry proceeds, it appears that this is indeed the burial cloth of the historical Jesus—and the vestment's bloodstains open up the possibility of cloning. The ensuing investigative journey—from Washington D.C., to Israel, to Belize—has global repercussions, and transforms the lives of all involved.

"The Shroud" is an adventure novel in the vein of Carl Sagan's "Contact"—exploring many of today's news-making scientific, spiritual, and ethical questions. The story has no sectarian agenda. At bottom, the message is one of decoupling spirituality from religious dogma, while better exploring mystical and transcendent pursuits with cutting edge technology. "The Shroud" resonates with the works of Deepak Chopra Michael Crichton, and Stephen Hawking.

Steven Meloan graduated from USC in Biology, and briefly worked in medical/cancer research. He has worked extensively in the software and web development world of the San Francisco Bay Area, at such companies as Cisco Systems and Sun Microsystems. His written work has appeared in Wired, Rolling Stone, Playboy, Buzz, Los Angeles, SF Weekly, and the San Francisco Chronicle. He was also a scriptwriter for a Los Angeles based "Webisodic" entertainment site (American Cybercast) that was featured in both Time and Newsweek.

Michael Meloan studied at the graduate level in Bio-Medical Engineering at USC, and was a Project Engineer at The Aerospace Corporation. His fiction has appeared in Wired, Buzz, LA Weekly, and a number of anthologies. He was an interview subject in the documentary "Bukowski: Born Into This," and has collaborated with NPR monologue artist Joe Frank, as well as having co-written a tech-thriller screenplay with actor Michael O'Keefe (Academy Award nominee for his work in "The Great Santini," and recently seen in "Michael Clayton").

"The Shroud" Trailer
It is the near future, and a genetic research team from the NIH has been asked by the Vatican to use the latest findings of the Human Genome Project to shed new light on the authenticity of the Shroud of Turin...

You have subscribed to alerts for Steven_and_Michael Meloan.

You can also sign-up to receive email notifications whenever Steven_and_Michael Meloan releases a new book.