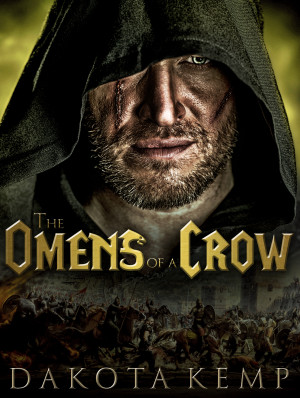 The Omens of a Crow

Rated 5.00/5 based on 1 review
Krow, a disgraced knight, has forsworn all his vows and turned his back on his past. Now, he drifts from village to village working as a hedge-healer. Saving lives is his trade, not taking them, and he'll be damned before he draws his sword again. But when rumors of a plague draw him to the village of Bliss, brigands taking advantage of the town’s misfortune test his dogged pacifism. More
A deadly plague burns through the village of Bliss, and a weary stranger approaches on a pale horse. The stranger doesn't know what treachery, fear, and pain he might encounter in the desperate village. He thinks he doesn't have anything left to lose. But it's not the plague, the murderers, or the terror he finds that reveals damnation. It's what he brings with him that could destroy everything he still loves.

Despite his mother’s repeated insistence that he “be normal” so as not to frighten others, Dakota became an author, and that may be the smallest of his eccentricities. After all, he’s saved the galaxy with his sidekick Garrus Vakarian on fifteen occasions, narrowly survived a perilous quest amidst the Fae, and foiled the assassination attempts of various rival wizards. He’s even held open the door for a princess or two.

In conversations, Dakota can be counted upon to deliver a "RWBY" quote that almost no one understands, and his snappy "Red vs. Blue" one-liners are never properly appreciated either. To mitigate this social ineptitude, he spends his days hiding in his batcave or, when the batsignal beckons, shouting at random people on the street about the power of stories.

Seriously. Campfire tales were one of mankind’s earliest activities. Humans need fiction in their lives to survive.

Dakota writes gritty science fiction and epic fantasy for audiences with a taste for bold stories of magic and adventure. These are the best kinds of people in his clearly unbiased opinion.

When he’s not engaging in fantastic tomfoolery, Dakota serves as an officer in the U.S. Army, because protecting his country and serving others is more important to him even than dragons. And dragons are super important.

Reviews of The Omens of a Crow by Dakota Kemp

I was prepared to not like this story when 'Black
plague' was mentioned. The unexpected plot twists captured
my interest and resulted in a enjoyable five star read. I did not
want to reach the end.

You have subscribed to alerts for Dakota Kemp.

You have been added to Dakota Kemp's favorite list.

You can also sign-up to receive email notifications whenever Dakota Kemp releases a new book.