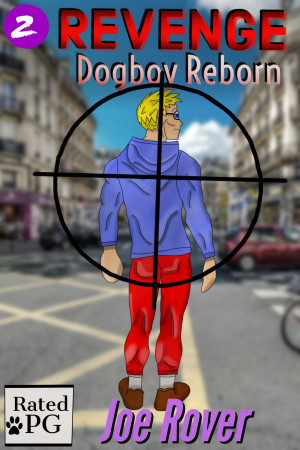 By Joe Rover
Shock. That was what Joe felt when he was told his friend was arrested for murder and sabotage. Following the recent space travel cruise ship sabotage, Brain becomes the prime suspect. Joe must dig deep to uncover the truth. But will the truth destroy him? More
Glue sliced the air with his other arm. "I thought we were friends! But you left me for dead!"
"Friends?! You tried to kill me on an almost weekly basis!"
Glue twirled his hand a bit. "Every relationship has its issues."

Shock. That was what Joe felt when he was told his friend was arrested for murder and sabotage.

Following the recent sabotage of the space travel cruise ships, Brain becomes the prime suspect. Joe must dig deep to clear his friend’s name. But each clue drives Joe further and further into a mystery that surrounds his past and his future.

Will learning the truth save Brain? Or destroy Joe?

If you are a fan of science fiction, superheroes, and adventure, join Joe as he fights to clear his friend's name in the latest Dogboy Reborn book.

Buy now before the wormhole closes.

The chapter "Revenge is Best Served Orange" won the Orange Belt round in the Wattpad "Write to Rank" contest.

About the Series: Dogboy Reborn

Five years ago, Dogboy sacrificed his powers to save the universe. Now, danger is brewing once more, and his powers have returned.