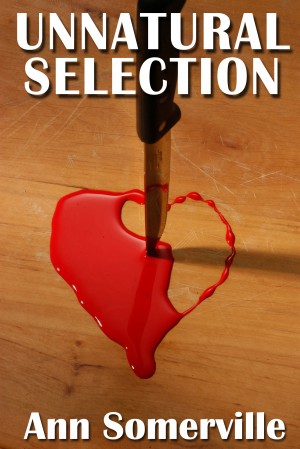 Rated 5.00/5 based on 3 reviews
Nick drinks fake blood to live, has had his canines capped, but he's no vampire. He *is* a cop, part of a London Met police Murder Investigation team.

Someone is killing other gay 'vees' and his job is to find out who. Complicating matters is the curious, attractive and stubbornly persistent Anton, who is determined to help Nick with his case and his non-existent love life. More
Four years ago, Nick Guthrie nearly died from a brain tumour until he received an experimental treatment that saved his life, even though the treatment brought bizarre and permanent side effects. Now he drinks fake blood to live, and has had to have his new long canines capped, but it's a small price to pay to keep doing the job he loves. He's a cop, part of a London Met Police Murder Investigation team.

I think what I enjoy most about this writer's work is that you are guaranteed a relationship between the main characters so intricate, complicated, and realistic, you are never sure until the very end whether it will work out and they'll have something lasting--and you vitally want them to because they're *that* real.

Nick and Anton are one of the strongest pairings I've read by Ann Somerville, and this story, written from Nick's POV, wraps around you from the first paragraph and holds you deep in his world all the way to the end. I don't personally care for vampire stories, but this isn't your average vampire story; in fact, to me it wasn't really one at all, but a smart, intriguing twist on the usual vamp. Another fascinating quality about Somerville's stories is the way she can employ a futuristic setting that is not all that far off from our own, and have you feeling that it *does* already exist, this world, or that it at least should. The futuristic elements are perfectly integrated into our familiar world. You believe it thoroughly.

Nick is a strong-willed, incredibly stubborn, often difficult man to know and love. Anton is beautifully up to the task. I think Anton was so right for Nick because Nick needed someone with patience and the ability to understand him. Anton was wise that way. That they are good for each other and you know it even when Nick isn't sure is something that will drive you crazy while reading, but also heighten the pleasure when Nick has his own insights into what he has with Anton and whether it's something worth holding on to.

I was overall pleased with how the author wrote this book. It was not a common vampire story where it killed human for their blood. It was a virus where it safe Nick's life. Very original too.

When I found out who was the killer...I have to applaud the author because I didn't see it coming. I kept guessing but I was wrong after all. Usually, figuring out the mystery was a bit easy but not this one!

The relationship between Nick and Anton was good and slow develop, especially when the book is novella-length.

4.5 stars. Intriguing and intelligent romantic police drama with a paranormal twist. There is a series of murders of gay 'vees' in London and the detectives of the London Police Murder Investigation Team are hot on the case.

The only thing Nick Guthrie loves is his job with the Murder Investigation Team. He nearly died several years earlier from a brain tumor but was cured by a controversial viral treatment that left him with strange 'vampire-like' side effects. Nick is having trouble coming to terms with his new life and his experiences with family and past relationships have made him withdraw from everyone around him.

Dr Anton Marber is a scientist who Nick saved from a gay bashing one night. He is a bit of a celebrity, kind of the David Attenborough of gay animal behaviour. He is very taken by the handsome and capable detective who saves his life and is determined to get past Nick's walls and into his affections.

There is so much I liked about this novel. Firstly it's very well written. The romance and mystery are subtle yet fascinating. It reminded me a little of Josh Lanyon's work. There is time spent on what the investigating team do to try and capture the killer. Anton is gorgeous in his stubborn persistence to gain Nick's affections and Nick's vulnerable self-isolation and dogged pursuit of the killer are admirable. I was really attracted to both these characters.

When I wrote 'paranormal twist' that is misleading. There are no supernatural 'abilities' involved in being a 'vee'. There is just the inability to eat/drink anything except blood and the emergence of enlarged canines which 'vees' usually have capped. The concept is approached more as a chronic illness that 'vees' have to learn to live with.

The only problem I had with the book was the ending. It was too rushed and anti-climactic, both in terms of the mystery and the romance. I wasn't overly keen on the identity of the bad guy and there was no big confrontation at the end. Don't worry romance fans there is a HEA. But for the first time in a romance novel I would have preferred a HFN ending. There are still TOO MANY unresolved issues with Nick and Anton's relationship for the usual 'I Love You's' at the end. And not just unresolved issues but huge opportunities for a series of books with these two characters.

Anton's job and frequent absences, Nick's family and his reporter ex (Harry), the implied preference for 'vees' to drink fresh blood, and of course Nick's detective work could give rise to lots more interesting stories. I guess I'm just a bit cheesed off that this book seems to be a standalone. I loved it and I. Want. More! Recommended for fans of M/M mystery romance and of course fans of Ann Somerville.