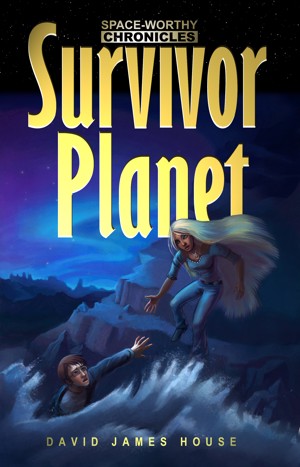 By David House
Oregon teenager Jess Worthy is contacted by advanced aliens and given a chance to travel to other worlds to see how well humans can adapt to alien cultures and environments. In a trip to a binary star system, his shuttle crashes on an icy moon. And someone or something is trying to kill him and his fellow passengers from other planets.
Available ebook formats: epub mobi pdf rtf lrf pdb txt html
First 20% Sample: epub mobi (Kindle) lrf more Online Reader
pdb
Price: $1.99 USD
Buy Add to Library Give as a Gift
How gifting works
Create Widget
Tags: adventure mystery science fiction space
About David House

David House is a human who resides in the capital village of a domain known as Oregon, a cool, cloudy, rainy region of a developing world called Earth. This planet is located in one of the backwaters of the galaxy, orbiting an unremarkable sun in one of the Milky Way’s minor outer belts of stars.
His series of novels and short stories about secret human contact with an advanced civilization is no cause for concern at this time. However, House’s subsequent books will receive further scrutiny for evidence of extraterrestrial knowledge.
The author’s low-wage job in public affairs for a government agency makes him particularly vulnerable to financial enticement. He might write anything – passing it off as “speculative fiction” – in exchange for a few kilograms of gold. If necessary, the author will be acquired for interrogation and perhaps erasure of any sensitive information from his memory.
But thus far, no one on Earth is taking him seriously, and that is just as well.

You have subscribed to Smashwords Alerts new release notifications for David House.

You have been added to David House's favorite list.

You can also sign-up to receive email notifications whenever David House releases a new book.