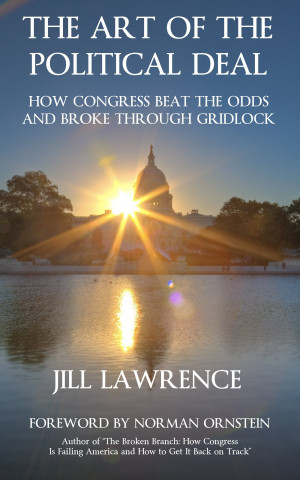 The Art of the Political Deal: How Congress Beat the Odds and Broke Through Gridlock

By Jill Lawrence
"The Art of the Political Deal" examines four successful congressional negotiations and what made them possible amid rampant partisanship and dysfunction. From headliners like Bernie Sanders and John McCain to aides nobody knows, these figures defied failure. And while some agreements didn't live up to their promise, they offer a hopeful template for future negotiators. More
Donald Trump ran for president as the consummate negotiator and dealmaker. You need flexibility, he said, along with hugs, cajoling and some "tug and pull." Likewise, Hillary Clinton said one of her goals if she became president would be to create "a nice warm purple space" for compromise in Washington.
Such talk may sound unrealistic given the gridlock and polarization that afflicts our government, yet breakthroughs do sometimes happen. "The Art of the Political Deal" tells the stories of four successful negotiations and the tools, techniques and conditions that made them possible—even during an era that's among the most partisan and unproductive in U.S. history.
The cast of characters ranges from headliners such as Paul Ryan, Bernie Sanders and John McCain to staff negotiators who reveal what they were thinking and saying as they haggled over painful details. All were grappling with deep-seated conflicts we see in our daily headlines: tax hikes versus entitlement cuts, the federal versus private role in health care, developers versus conservationists, the precarious balance between farming interests and food-stamp recipients.
These are examples of four times when our elected officials and their aides defied failure. The agreements did not always live up to their promise. Yet they were bright spots in a dark landscape—snapshots of professional politicians and staff doing their jobs well, for the good of the nation, against the odds. In that respect they present a template for future negotiators on how to achieve that rarity of our political era, a deal.
Available ebook formats: epub mobi pdf lrf pdb txt html
First 15% Sample: epub mobi (Kindle) lrf more Online Reader
pdb
Price: $5.99 USD
Buy Add to Library Give as a Gift
How gifting works
Create Widget
Tags: politics government veterans budget democrats republicans congress food stamps partisanship political negotiation
About Jill Lawrence

Jill Lawrence is a columnist and former commentary editor at USA TODAY, and author of the 2017 book, The Art of the Political Deal: How Congress Beat the Odds and Broke Through Gridlock. She spent decades reporting on the presidency, Congress and campaigns for both. A former columnist for Creators Syndicate, U.S. News and World Report, Politics Daily and The Associated Press, she has won National Press Club, Sigma Delta Chi, National Headliner and National Society of Newspaper Columnists awards for her writing. Her positions have included managing editor for politics at National Journal; senior correspondent at Politics Daily; national political correspondent at USA TODAY, and national political writer for the AP. Her work has also appeared online in Politico Magazine, The Week, The Daily Beast and The Atlantic. Lawrence is co-author of "Governors and the Presidency: How They Campaign, How They Govern," for the Eagleton Institute of Politics at Rutgers, and "Phoning It In and Failing to Show: The Story of the 2014 House Primaries," for the Brookings Institution, and a contributor to "The Surge: 2014’s Big GOP Win and What It Means for the Next Presidential Race." Lawrence has a master's degree in journalism from New York University and a bachelor's degree in music literature from the University of Michigan.

Reviews of The Art of the Political Deal: How Congress Beat the Odds and Broke Through Gridlock by Jill Lawrence

You have subscribed to Smashwords Alerts new release notifications for Jill Lawrence.

You have been added to Jill Lawrence's favorite list.

You can also sign-up to receive email notifications whenever Jill Lawrence releases a new book.