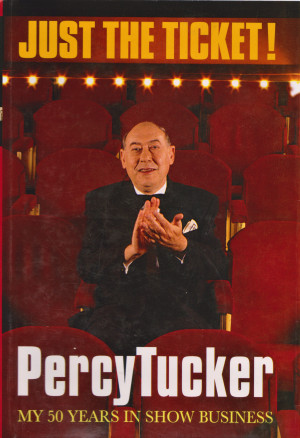 Just The Ticket! Part One - The Impossible Dream

In his company, we revisit theatres old and new and meet a parade of colourful, sometimes outrageous personalities, share in the excitement of opening nights at home and abroad and meet the most significant performers and directors of the last fifty years. The author has not ignored the disappointment and failures or the struggle to overcome the stranglehold of apartheid on the arts and gives an insider’s view of the battle that raged between managements and government during the boycott years while the theatre itself became the voice of protest and a significant force for change.

Percy Tucker – who founded the Computicket ticket-selling system which became the most revolutionary and unique system of its kind in the world has had a rich life at the hub of show business and sport in South Africa. Stage-struck from childhood his passion and commitment to the live arts led him to found Show Services in 1954, an initially small-scale ticket agency in Johannesburg to the deep displeasure of his father who could not understand why his graduate son wanted to be mere ticket seller.

Just the Ticket! Is the first-hand view of Tucker’s journey from these modest beginnings to becoming the trusted advisor and confidant to theatrical managements, the guide and comforter of visiting international stars and something of an unofficial impresario himself and is told with humour, humility, nostalgia and a sense of history. To be star struck for a lifetime and to succeed in turning this passion into a rewarding career is the stuff of which dreams are made. For Percy Tucker, the dream became a reality. Welcome then to Just the Ticket! and its star-studded cast, a theatre-lover’s travelogue that will enthral and entertain during many hours of satisfying reading.

Born in the small mining town of Benoni, South Africa in 1928, Percy Tucker has devoted his life to nurturing and furthering the live arts and entertainment in his native South Africa and, in so doing, has forged mutually productive relationships with creative artists and managements across Europe, Britain and the USA.

The breadth of Percy’s interests, ranging from his first love – the theatre – through classical music in all its forms to ballet, modern dance, popular music, variety and spectacle, saw him become an integral figure in the show business industry in his country as advisor, councillor, mentor, organizer, impresario and innovator.

Internationally, he is known, above all, for the founding of Computicket, the world’s first fully operative computerized, centralized ticket-booking system, which he introduced in South Africa in 1971. For this concept and its realization, Percy Tucker has been extensively honoured as it changed forever the way tickets for entertainment was marketed worldwide.

Percy’s unique combination of passionate commitment to the arts with his commercial vision, business acumen and marketing skills has brought him recognition, love and respect that he never sought, and a richly fulfilling life which he treasures.

Since his official retirement in 1994, Percy has published his autobiography-cum-history of the South African theatre, Just the Ticket! and remains actively involved in the entertainment industry as an advisor, lecturer, board member and researcher, and continues to travel the world, ever alert to new horizons.

You have subscribed to alerts for Percy Tucker.

You have been added to Percy Tucker's favorite list.

You can also sign-up to receive email notifications whenever Percy Tucker releases a new book.