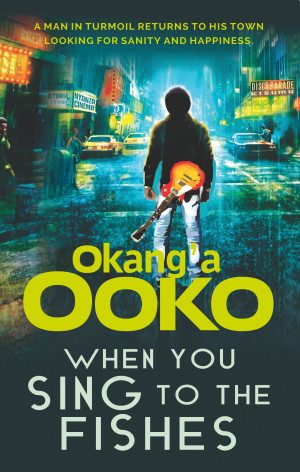 When You Sing To The Fishes

By Okang'a Ooko
Guitarist Otis Dundos is back in Kisumu. He is back for some unfinished business. He is searching for sanity and happiness. Happiness? In Kisumu lives the woman whose unfulfilled love still dwells his heart. But the moment he steps into Kisumu, he is thrown into a nightmare of intrigue, frustrations and stark terror. His mind is too bamboozled to even think. More
Guitarist Otis Dundos is back in Kisumu, the addictive and possessive lakeside town. Back in the ‘80s, he was the Urban Benga guitar legend. His commercially potent mix of hard benga and lofty rumba was loud with a culture surrounding it, and a cult-like following. It ignited an entire generation of music fans. It made him rich and famous.

When he left Kisumu twenty years ago, it was a sudden unpleasant event. Everything ended in tragedy. He was twenty-nine years and at his peak . Today he still is the artsy man: the musician, the guitarist. People have died fast; the men and women who helped him make music… they have all died or wasted away. Is he about ready to follow suit? What is left? The past has unfulfilled dreams, good life, nice cars, easy money, expensive perfumes, glamourous women, living on the road and in the studio. And conniving band mates, thieving promoters and clever pirates.

The present is bearable but holds no promise: he is forty-seven. If he has to accept his forced retirement, he has to learn to be a local Kisumuan, not the famous name. He reminisces about the romantic encounters of ‘70s. The future is uncertain. He is searching for sanity and happiness. Happiness? In Kisumu lives the woman whose unfulfilled love still dwells his heart. But his mind is too bamboozled to even think.
Available ebook formats: epub mobi pdf lrf pdb txt html
First 10% Sample: epub mobi (Kindle) lrf more Online Reader
pdb
Price: $4.00 USD
Buy Add to Library Give as a Gift
How gifting works
Create Widget
Tags: music fiction music business musica 80s music based african music music band music and sex music artists music and love music culture
About Okang'a Ooko

Okang’a Ooko is the author of Businesswoman’s Fault, (stories), and three mainstream novels, including Bengaman, When You Sing To The Fishes and the latest, Hunter & Gatherer mostly vivid accounts of scandalous vices, human folly, power games, and peopled by men and women struggling to succeed in the new African renaissance. He writes thrilling and intriguing character-driven fiction based on African characters and situations. His work presents a compelling narrative voice and a new way of seeing the world.

Ooko is a very ambitious and hardworking writer for this generation. His three Must-Read cavalier bestselling novels are in categories that matter to him: history, politics, pop culture (especially music), love-and-danger, business, corruption, true crime, and self-development. Known as “Kenya’s new master storyteller”, Ooko epitomizes a new shift in African fiction and his books are mostly set in Kenya. He loves to dispel the myth that Africans don’t read, and incredible readers who have stumbled upon his books have liked them tremendously. He has been writing since childhood when his mother took him to the local library in his hometown of Kisumu to keep him out of the company of bad boys. As a serial daydreamer, it was nice to finally get the stories on paper when he started writing full time in retirement in 2017. He has not looked back since. He believes current African issues (pop culture, politics, business, corruption) make dramatic stories with or without a literary bent, and he knows there is a huge potential to create intriguing stories around these themes. No writer is doing it. With his new book, Hunter & Gatherer, he currently aims to shepherd his vocation as a writer of commercial African fiction.
In addition to being a prolific writer, he is an artist, an acclaimed graphic designer and musician. He lives the life of an artist. He worked in the publishing industry as a designer and typesetter, community manager at a content development company, and book cover designer for fiction and non-fiction.

When he isn’t reading or writing engaging stories, he’s probably singing, watching edgy black comedy on Netflix. He was born and raised in Kisumu, in Kenya. He lives in Nairobi with his wife and four children.

In his spare time, he gives writing lectures, creates graphic arts, plays the guitar and draws things. You can connect with Ooko on Facebook at facebook.com/rd.ooko/.You can also visit his website, okangaoo.com, to sign up for emails about new releases.

Reviews of When You Sing To The Fishes by Okang'a Ooko

You can also sign-up to receive email notifications whenever Okang&#039;a Ooko releases a new book.