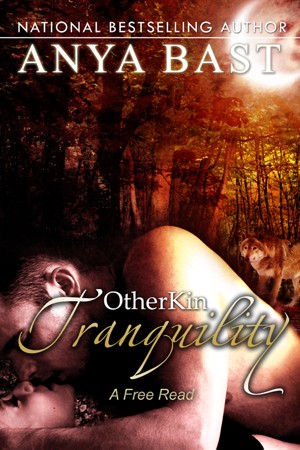 Rated 4.25/5 based on 4 reviews
Roane leaves the Fury werewolf pack to make room for the new alpha. He settles in a town called Tranquility and immediately raises the hackles of the local pack leader.

Things get worse when Roane sees Scarlet, the pack leader's sister, and will do anything to possess her.

Even worse, Roane gets one look at Scarlet, the pack leader's sister, and will do anything to possess her. Scarlet tries to resist him, but his touch inflames desire she can barely control. And that means heaps of trouble for both of them.

Anya Bast is the award winning author of numerous works of romantic fiction, mostly all paranormal and mostly all scorching hot. She lives in the country with her husband, daughter, seven cats and two dogs.

She grew up in Minnesota and still favors the colder climates. After high school she moved to the southeast United States where she attended college. While in graduate school she sold her first book and decided to pursue her lifelong dream of writing instead of a career in psychology.

Somewhat reclusive by nature, she can be drawn out with a good bottle of red wine, classic movies, or good music. When she's not writing, she can be found trying to grow organic vegetables, shopping in thrift stores for that perfect piece of clothing, or dreaming about travel to some faraway country.

She is the New York Times bestselling author of the Elemental Witches and Dark Magick series, and is now working on a new series. The Brotherhood of the Damned will feature immortal Viking warriors, demons, witches and more. Watch for the first book, Embrace of the Damned, to release from Berkley Sensation in May, 2012.

Romance and action with a good dose of sex. Good read.

I really enjoyed this book!!!

Very explicit, I'm over 50 and it made me blush. Good story line, just wish more time had been spent on the story, and less on the mechanics of the sex act.

You have subscribed to alerts for Anya Bast.

You have been added to Anya Bast's favorite list.

You can also sign-up to receive email notifications whenever Anya Bast releases a new book.