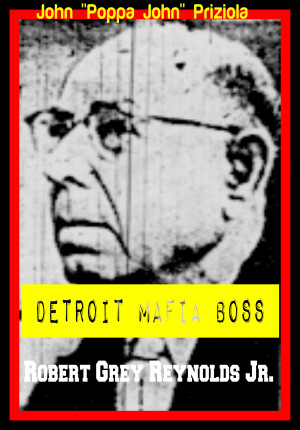 By Robert Grey Reynolds, Jr
John Priziola was one of multiple Detroit area Mafia bosses in the years between the 1930s and the 1960s. He was involved in numerous rackets, most notably the lucrative narcotics trade. Michigan's largest city became a nexus of a thriving drug trade that operated internationally. Detroit Police Commissioner, George Clifton Edwards, testified about the city's huge mob problem in October 1963. More
John "Poppa John" Priziola was a lynchpin Mafioso in the annals of Detroit, Michigan crime. He was notorious as a receiver of narcotics for a heroin smuggling syndicate that thrived in the mid twentieth century. His crimes and illicit activities were a focus of the McClellan U.S. Senate Crime Committee. The congressional body held numerous hearings about La Cosa Nostra operations in the late 1950s. As manager of the Bilvin Distributing Company, Priziola and his jukebox distributorships were Mafia controlled. The Bilvin firm included Teamsters member and lawyer William Buffalino as a partner. These companies became a central focus of the Senate Rackets Committee deliberations.