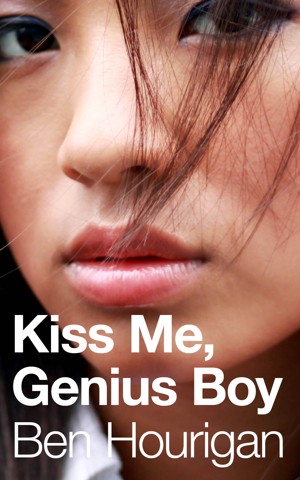 By Ben Hourigan
Rated 5.00/5 based on 1 review
Joshua Rivers was born to expect great things. A former child prodigy and the son of a lottery winner, he also believes himself blessed with a vision of his perfect destiny and his perfect love. Now in his early twenties, he waits for the moment, and the girl, that will show him his time has finally arrived. And when it does, he resolves to take what is his, whatever it costs him or anyone. More
"In that moment, there arose all the resolve I hoped would be with me when I finally met her, and my vertigo turned to exultation. So what if she was married? I had contemplated that long ago, and decided I'd have her anyway."

Joshua Rivers was born to expect great things. A former child prodigy and the son of a lottery winner, he also believes himself blessed with a vision of his perfect destiny and his perfect love.

Now in his early twenties, Joshua already feels left behind by life. His long-time lover Lilian Lau is well on her way to becoming a famous artist, and his former classmates are also racing toward their success. Meanwhile, he waits for the moment, and the girl, that will show him his time has finally arrived. When it does, he resolves to take what is his, whatever it costs him or anyone.

Kiss Me, Genius Boy is the first part of the No More Dreams series: an unusual story about love, ambition, and the problems of being privileged.

Praise for Kiss Me Genius Boy:

"I’ve been telling my friends how refreshing it is to read something by one of my generation, instead of something by someone that's dead. … Above all I admired the pithy, adroit little maxims on the nature of things." —Dylan Thorn, author of I'm Dead

"A page turner, very funny and unusually honest and frank … Lily really steals the show. A nymphomaniacal exploiter of men and women, a deeply interesting, entertaining and wild character who lights up every page she is on." —Nicola G.

"Just read Berko scene from KMGB. Kick ASS! That scene just earnt me buying vol 2 when it comes out. Lily needs a cape and skin-tight leather pants. Lily needs her own graphic novel. Lily should be immortal, and probably is. Read KMGB so you can meet Lily. I secretly think she is Joshua's alter-ego. I think she might now also be mine." —Esme F.

"Simple, direct but with subtle, thought-provoking passages about self-awareness and one’s relation to life and others. I can’t wait for the next book." —Aiza C.

I was born in 1981 in Rosebud, a tourist town on the Mornington Peninsula, about an hour and a half's drive from Australia's second-largest city, Melbourne. The son of two art teachers, I grew up in a large house in nearby Tootgarook, filled with books and art and paints and paper and love.

My first novel—Kiss Me, Genius Boy—includes a lot of autobiographical material. It's set in the culturally isolated bayside area where I grew up. Like me, the main character, Joshua Rivers, learned to read very young, and skipped two grades in primary school. He endures a lot of unhappiness in love (all his own fault), but also has some undeserved good luck in that area, which he's frequently ungrateful for. His favorite book and mine are the same: The Dispossessed, by Ursula Le Guin.

But my characters are not exactly me, or the people I know, and the stories I tell aren't exactly the stories of our lives. The kind of fiction I write is a mashup: bits cut out of reality, rearranged and spliced with outright fabrications, in the service of telling a story and exploring the deeper truths in life. In this case, what's fascinated me over the past few years I've been working on this first novel, and the two further volumes of No More Dreams that follow it, is the peril of living solely for one's dream of a perfect future.

I like to read a wide range of things: aside from Le Guin, I'm deeply attached to Kundera, Tolstoy, Laozi, Nietzsche, Kierkegaard, Leonard Cohen, and Ayn Rand. But the author who's influenced me the most is the Japanese Nobel Prize winner Kenzaburo Ôe, author of A Personal Matter and The Silent Cry. It's Ôe that I've taken my present semi-autobiographical approach from, and Ôe that inspired me not to gloss over the ignoble and grotesque things that we think, that we do, and that are done to us and others.

As I grow older, and as I confront the world through art, it strikes me more and more that as humans we are united in suffering, in death, and also in love. My mission as a writer, should I have one, is not just to disseminate whatever small degree of vision or wisdom I may have, but also to remind people that in their alienation and their darkness, they are not alone.

May you find, in the pages I have written for you, something to light your way in the night.

Also in Series: No More Dreams

Reviews of Kiss Me, Genius Boy (No More Dreams #1) by Ben Hourigan

I like it. It was light, with bits of humor and the honesty of what teenagers and young adults, special or not, are really going through. In fact I could really relate well to Joshua Rivers—his dreams, frustrations and even his views about destiny, sex, love and existentialism. In my opinion, a true genius is someone who takes a complex thing and makes it look simple while the academic does the opposite. I may not be a genius, but I am innately curious about a lot of things. I could not better put into words what Joshua Rivers had said in the story. My favorites are those bits wherein he rebelled against authority, the sense of right or wrong. Also, my other favorite character is Lily. She’s brutally blunt, forward, and fearless. Her promiscuity only makes me love her more. I could sense that there is something to her than sexual acts, like it was just a façade to cover up some inside vulnerabilities. Or whatever. Writing style reminds me a bit of Stephen Chbosky’s The Perks of Being a Wallflower. Simple, direct but with subtle, thought-provoking passages about self-awareness and one’s relation to life and others. I can’t wait for the next book. I’m sure I will not be disappointed reading more about Joshua Rivers and company.

You have subscribed to alerts for Ben Hourigan.

You have been added to Ben Hourigan's favorite list.

You can also sign-up to receive email notifications whenever Ben Hourigan releases a new book.