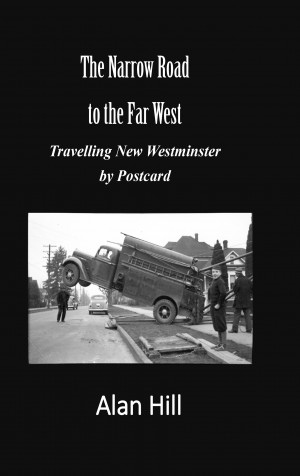 The Narrow Road to the Far West

By Alan Hill
In this book, the author delves deeply into the Psychogeography of his home City. He is engaged in an active exploration of his urban environment and a study of how our geographical location influences our emotional behaviour. He has stepped off the predictable path and into the dense undergrowth of our urban awareness. More
THE NARROW ROAD TO THE FAR WEST
First up, it’s a new collection of poems from the city’s poet laureate, Alan Hill.
The Narrow Road to the Far West: Travelling New Westminster By Postcard, recently released by Silver Bow Publishing, is described by the author as his “very personal tribute to some of the places that have meant most to me in my time living in New Westminster.”

Each poem is its own literary “postcard” to a uniquely Royal City location – some well-known, like the petting farm at Queen’s Park, the Tin Soldier and River Market, and others of a less-travelled variety, such as the dollar store at Royal City Mall and the Great Clips on McBride Boulevard.
The poems include both elegant imagery and a sense of the humour and absurdity of day-to-day life.
Like this moment from Centre Span, Pattullo Bridge …

“It is the bruised skin of something extinct
that has been stretched, pulled tight
across the high-rise limbs of the city.”

Or this, from Old Crow Café, Front Street …
“I left with a quadruple Americano, a
tattoo of a raven on my thigh

the feeling, it may not be too late, to
learn the banjo, run away, join the circus.”

Alan originates from the English/Welsh borders and has travelled extensively and worked in jobs ranging from renovating old graveyards to working in a jellybean factory. He began writing while living and working in Botswana where he met his Canadian wife to be and he arrived in Canada in 2005.

"The Broken Word" is Alan Hill's second full collection of poetry. His first poetry collection "The Upstairs Country" has enjoyed national and international sales. His poetry has also appeared in Canada in “CV2”, “Canadian Literature”, “Vancouver Review”, “Antigonish Review”, “Quills”, “Sub-Terrain”, “Poetry is Dead”; in the UK in “South”, “The Wolf ”and “Turbulence”; and in the United States in “The Dallas Review” and in a number of international anthologies.

Alan is a Past Director on the Executive Board of the Federation of BC Writers, a member of The Royal City Literary Arts Society and features at many literary events in the Lower Mainland of BC.

You have subscribed to alerts for Alan Hill.

You have been added to Alan Hill's favorite list.

You can also sign-up to receive email notifications whenever Alan Hill releases a new book.