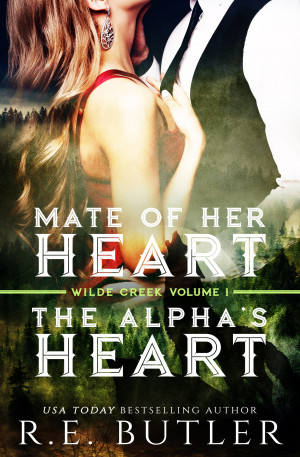 Rated 3.67/5 based on 3 reviews
Mate of Her Heart - This story contains a meddling brother, a human fighting a pack of male wolves for the only woman he’s ever loved, a female who thought she had a good plan, and a male and a female who have loved each other forever.
The Alpha's Heart - This book contains one pissed-off, emotionally damaged alpha, the human woman who can tame him, and a sweet little surprise no one expected. More
**This book contains the first two books in the Wilde Creek Series. If you already own those books, please do not purchase this book.**

Mate of Her Heart (Wilde Creek One)

Werewolf Eveny Moore is coming into her first heat at the age of twenty-five. Bucking tradition, she chooses to go through her first heat alone instead of choosing an unmated male from her pack. There is only one male that she wants in her bed and her life: her best friend, Luke Elrich. But Luke is human and doesn’t understand the consequences of her heat-cycle, so she hides out in a safehouse, planning to ride out the cycle alone and then ask Luke to be her mate.

Luke has loved Eveny forever, but something is going on between them. He’s afraid he’s losing her forever, until she promises to talk to him after her heat-cycle is over. He overhears her brother, the pack alpha, ask another wolf to go to Eveny and take her through the heat-cycle. What her brother doesn’t know is that the male plans to invite some of his friends along. And Eveny is alone in a remote cabin, unprotected. Luke will do anything to keep her safe, even if it means going up against four wolves.

Alpha wolf Acksel wakes up one morning in the bed of a woman he’s had a crush on since high school. Brynn Mara was the one human who had been friendly to him in school and now, ten years later, she is snuggled up at his side, smelling like passion and sweet dreams. Even though Acksel has declared that his pack members can mate with humans from now on, he knows that any woman he takes as his mate will have a target on her back. Especially if she’s a fragile human. Deciding it’s better to cut things off than string her along when there is no hope for a relationship, he leaves without a word and ignores her.

But it doesn’t matter if Acksel acknowledges her or not, because their one night of passion has left a permanent reminder of what happens when one drunk wolf forgets protection. Angry, banished wolves from his pack discover Brynn’s secret and decide to use her against Acksel. His worst fears have come true and the only woman that ever touched his heart is now suffering because of his mistake. Can he save her in time?

This book contains one pissed-off, emotionally damaged alpha, the human woman who can tame him, and a sweet little surprise that no one expected.

A Midwesterner by birth, R.E. spent much of her childhood rewriting her favorite books to include herself as the main character. Later, she graduated on to writing her own books after "retiring" from her day job as a secretary to become a stay-at-home mom.

When not playing with her kids, wrestling her dogs out the door, or cooking dinner for her family, you'll find her typing furiously and growling obscenities to the characters on the screen.

This is a short and sweet human/werewolf, friends to lovers romance. The concept of the humans being aware of the supernatural is one seldom used, but I thought it was well done here. The story sets the scene for a series that will take place in this little 'mixed' (werewolves and humans) town of Wilde Creek.

Luke is the human in this relationship and has been in love with his best friend for a long while, just hasn't said anything. Same goes for Eveny, the local pack alpha's sister, but for her, it's for a better reason: mixed matings aren't allowed (as in they're exiled if they happen). This series uses the concept of mating heat and it's a big focal point of the story as it's what spurs the events and the couple's eventual confessions.

Though it was a short read, it felt complete and I liked the characters thoroughly. They did get their happy ending, so don't fear. There was a good dose of romance, some steamy times, a loving father figure, a bit of sibling tension, some action, and a good ending with lessons learned.

The Alpha's Heart is book 2 in the Wilde Creek series. It really should be read after the first book or you'll miss a chunk of the story. This is Eveny's brother's book.

Acksel was a right jerk in the last book, so really this was his redemption story, and it was fairly well done. Drunk to the point of stumbling after he fixes the mess with his sister and wallowing in misery because of his royal screw up, he winds up sleeping with a woman he's had a crush on since school and manages to get her pregnant. Since Brynn is human, he runs away from her to protect her (not knowing she's pregnant) and proceeds to ignore her. His wolf has other ideas and slowly drives him to the brink.

Their story is full of family and pack drama, misunderstandings of their own makings, forgiveness, steamy fun times, humans proving they can be strong, and the power of forgiveness and inclusiveness. It was a great followup to the last book and I'm happy Acksel resolved his issues.

Read these two a long time ago but didn’t bother to follow this series as I disagreed with the disgusting plot in book one. Amazon will not let me use a specific word to state what is allowed to nearly happen.
I was able to get the whole series free through Smashwords so have re-read them before starting the rest.
This author has really not done herself any favours with these first two books in this series. Book one could do with a total change of plot rewrite.
Having read more books from this author, she does seem to have a varied opinion of her own sex. In Awaken A Wolf, the women were nothing more than sex objects and yet in others they have been strong, smart and capable.
1 - MATE OF HER HEART
1.5 stars. Not what I was expecting from this author.
I understand the pack politics and though I vehemently disagree with Acksel's interfering attitude, I was more angered over the kiss and make up attitude at the end.
Where was the feisty heroine standing up to her ratbag of an Alpha brother for everything he has done wrong? Why did the father not say anything?
Poor Luke does nothing wrong but defend Eveny and gets the hell beaten out of him but hey, it is wolf politics, so understandable and acceptable.
I only hope that Acksel learns from this experience because he is a shitty alpha so far.
Read and reviewed a long time ago but was disappointed in this author for writing this drivel.
2 - THE ALPHAS HEART
Acksel spends the first half being as completely unlikeable as he was in book one. Never really redeems himself, though I didn’t end up hating him as much.
Brynn is the typical heroine who is treated like dirt but forgives every wrong within five minutes.
The fact she puts up with all the she wolves, many of whom have had sex with Acksel, giving her crap for ages before putting them in their place, shows she is not that strong of an alpha female. She needed external items to do it too.
Other characters are introduced to continue this series.
Read and reviewed a long time ago but can only be read in the box set now.

(reviewed 6 months after purchase)
Shelley Chastagner reviewed on May 2, 2020

A Mate of Her Heart 5 stars
Excellent new series. Both Luke and Eveny are strong characters. The storyline is well done, with lots of tense moments and action. The side characters were mostly vague antagonist that added to the drama without taking over. I liked that the H/h had spent years knowing and harboring their love for one another. When a deadline arises on their relationship, they both willingly give up all to be together. Next book please Ms. Butler!

You have subscribed to alerts for R.E. Butler.

You have been added to R.E. Butler's favorite list.

You can also sign-up to receive email notifications whenever R.E. Butler releases a new book.