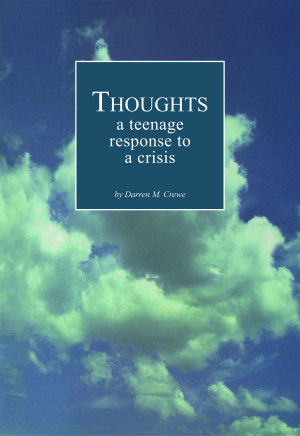 THOUGHTS ... a teenage response to a crisis

After the initial diagnosis Darren adapted quickly to cope with the effects of his treatment. He never looked forward to hospital visits but he always made the best of them, playing with other kids, enjoying computer games and being cheeky to the staff. At home Darren never dwelt on his illness nor allowed others to. Anyone who mentioned it would receive a look from him that demanded a change of subject, words were unnecessary. He became two people, one strong and mature, accepting his fate and the other a boy whose zest for life grew stronger and more determined.

You have subscribed to alerts for Darren Crewe.

You have been added to Darren Crewe's favorite list.

You can also sign-up to receive email notifications whenever Darren Crewe releases a new book.