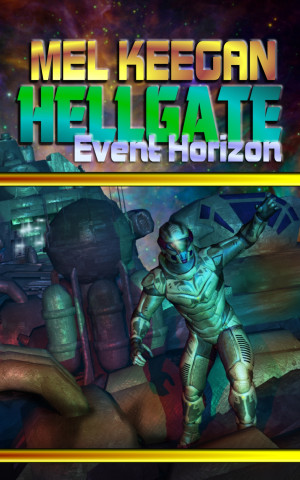 The immense closing volume of the Hellgate series -- two novels under one cover: over 300,000 words in which Mel Keegan ties off every thread, resolves every mystery from The Rabelais Alliance through Deep Sky, Cry Liberty, Probe and Flashpoint. Colonial War, Zunshu, transspace, Lai’a … Event Horizon leaves no question unanswered, in an explosive, unpredictable and satisfying finale. More
With the worlds of the Deep Sky declaring their independence and the super-carrier battle groups assigned to quell the Colonial War by any means, Neil Travers and Curtis Marin find themselves in an explosive situation.

On the one hand, the London and the Avenger are poised to move against Jagreth and Borushek ... on the other, the Zunshu continue to strike out of the massive Hellgate storms ... and caught between them are the most powerful ships on either side of the frontier. Richard Vaurien's Wastrel -- a salvage tug designed to work the fragmented space on the edge of Hellgate. And Mark Sherratt's Lai'a -- with the body of a warship and the mind of a Resalq super-AI.

A Freespacer crew pledged to fight for the freedom of the Deep Sky ... a unique artificial intelligence bred and born for the region beyond Hellgate -- the realm that has become known to a handful of pilots as transspace.

From a searing battle fought in the shadow of Oberon to the depths of Zunshu space beyond The Blood Gate ... from the cool, green forests of Jagreth to the most alien worlds Marin and Travers could never imagine, and a first contact that will change the future ... this is Event Horizon.
Available ebook formats: epub mobi pdf lrf pdb
First 5% Sample: epub mobi (Kindle) lrf more
pdb
Price: $9.99 USD
Buy Add to Library Give as a Gift
How gifting works
Create Widget
Tags: artificial intelligence gay space opera science fiction aliens glbt robots technology first contact starships
About Mel Keegan

About the Series: Hellgate

In a desperate bid to counter the threat of a shadowy enemy, Earth’s distant government taxes its colonies to build the brutal DeepSky Fleet and conscripts colonial youth to man it. But this tinder ignites the Colonial War of the 2660s -- while the unknowable threat from ‘the stormy side of the sky’ beyond Hellgate proves appallingly real. A father’s quest for justice for his murdered son takes Curtis Marin back into Fleet, where he encounters Neil Travers and the rogue crew of Richard Vaurien’s salvage vessel Wastrel. They stand at the pivot point of both the Colonial War and the conflict against the unknown, unknowable Zunshu ... in a place where time and space collide, the future of mankind will be decided.

You have subscribed to alerts for Mel Keegan.