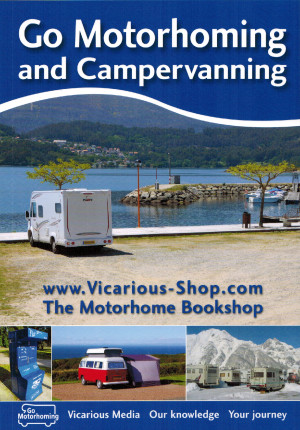 By VicariousMedia
Dubbed the "motorhome bible", Go Motorhoming and Campervanning is the most comprehensive book available on the subject of motorhoming. It will tell you everything you need to know before you go and will act as a handy reference guide during your journey. Whether you're a novice or old hand, don't Go Motorhoming without this book. More
It is divided into seven detailed chapters, discussing everything from what questions to ask before you buy to how to stay warm in the winter. Chapter by chapter your knowledge will build, and everything you need to know is fully explained; not just how things work, but also what that means to you. Real life examples clarify the point and colour pictures show you exactly what to look for. The authors have written mental challenges for you so that you can work out exactly what you want from a motorhome.

Key Features
The most comprehensive motorhome and campervan book ever written.
Completely explains the concept and practice of motorhoming.
Designed to be read cover to cover and indexed for reference.
Written by motorhoming experts from first-hand experience and edited by industry experts.
Every paragraph explains at least one new point.
Useful and informative whether novice or old hand.

Campervanners may not consider themselves as motorhomers, but the reality is they drive similar vehicles only a different size. This is important because motorhome and campervan users have the opportunity to do so much more than pitch at campsites. For example, they can use Motorhome Stopovers, called Aires in France, Belgium, and Luxembourg or Stellplatze in Germany, Switzerland, and Austria. Motorhome Stopovers, also called Camper Stops, are dedicated overnight parking areas where you can park and sleep overnight in your motorhomes and campervans. Go Motorhoming and Campervanning completely explains the ins and outs of free offsite parking and campsites.

Praise for Go Motorhoming and Campervanning

Practical Motorhome '... it's jam-packed with information on touring,... Whether you're a true beginner or an experienced motorcaravanner, you're sure to learn to something from the helpful book.' Sarah Wakely.

Motor caravanner 'It really is a powerhouse of information plus hints and tips based on real active motorcaravanners' experiences both at home and abroad. It is lavishly illustrated and written in an easy-to-digest style, debunking myths and explaining terminology as it goes.' 'Without question, if you want a first class primer to the motorcaravanning world, which is also an up-to-date useful reference book to keep in the van, then this is it. I've a lifetime of motorcaravanning under my belt, but I wouldn't leave home without this useful glove-box sized travelling companion.' Gentleman Jack.
Available ebook formats: epub mobi pdf lrf pdb txt html
First 15% Sample: epub mobi (Kindle) lrf more Online Reader
pdb
Price: $6.53 USD
Buy Add to Library Give as a Gift
How gifting works
Create Widget
Tags: travel guide campervan motorhome fulltime rving travel abroad road travel europe travel camper living europe trip campervan hire
About VicariousMedia

Who we are
Vicarious Media is a small company with a big personality.

After a year of travelling around Europe in a motorhome, Chris Doree and Meli George returned the UK and wrote the book they wish they had read before they went travelling, Go Motorhoming and Campervanning. This was no sugar-coated travelogue. It was the cold, hard truth about living in a motorhome full-time; everything you needed to know and nothing you didn’t. Many years later, Vicarious Media is still giving you all the information you need to have a fantastic journey with none of the fluff.

Travel Europe in a Motorhome

How it all began
Back in 2003 Chris and Meli packed in their careers, sold their house and set off full-timing around Europe in a 1993 Hymer 654 A-class motorhome.

After visiting all four compass points of Europe, the pair returned to the UK in 2004, where they settled in the southwest coastal town of Minehead. It was here, in a beach hut, that the pair compiled and self-published their first book, Go Motorhoming Europe (now titled Go Motorhoming and Campervanning), a figurative bible of all things motorhoming drawn from personal experience full-timing and designed to give readers a comprehensive and realistic guide to motorhoming and campervanning. It was with this that Vicarious Books was formed.All the Aires France Preorder 2007During their time touring Europe, Chris and Meli discovered Aires – also known as motorhome stopovers, stellplatzes and sostas – which they found to be virtually unknown by British motorhomers. Having noticed a serious lack of information for English speaking motorhomers, Chris and Meli decided to spread the word by personally researching, inspecting, photographing and publishing All the Aires France in 2007, the first English language motorhome stopover guidebook of its kind.

The success of this flagship guidebook spawned the publication of the now widely recognised All the Aires series, with two new motorhome stopover guidebooks for Spain and Portugal, and Belgium, Luxembourg and the Netherlands being released in 2009.
Chris inspecting windmills for Road Trip Europe: Go DutchIn 2008 and 2009 Vicarious Books expanded its range of publications again with Sea View Camping Britain and Camping Morocco respectively. After several editions, Sea View Camping Britain was split into the Sea View Camping series between 2014 and 2016. It’s now published as individual camping guides for Scotland, Wales and the West Country.

Vicarious Books officially changed its name to Vicarious Media in 2016, looking to broaden its offering beyond just books to suit the modern motorhomer, camper and traveller.

Vicarious today
The company has come a long way since Minehead, 250 miles in fact. Today Vicarious Media is based in an industrial unit 10-minutes from the Eurotunnel in Folkestone, Kent. The company is now an industry leader, producing and retailing unique, ground breaking travel guidebooks for motorhome stopovers, camping and touring across Europe.

All the staff at Vicarious Media work tirelessly to update existing guidebooks, plan new and exciting publications, and scout out unique travel guidebooks, maps and accessories for motorhomers and tourers alike.

Beyond its own guides, Vicarious Media is the trusted UK agent for France Passion and the ACSI Camping Card and retails a wide range of specially selected guidebooks, maps and atlases from travel publishers all across the world.

Vicarious vision
Vicarious Media strives to provide the best motorhome and travel information available through our unique range of handpicked travel guidebooks. Using their extensive touring and motorhoming experience across Europe and the rest of the world, the team at Vicarious Media has the knowledge that will make your journey easier and more enjoyable.

Our knowledge, Your journey

Reviews of Go Motorhoming and Campervanning by VicariousMedia

You have subscribed to alerts for VicariousMedia.

You can also sign-up to receive email notifications whenever VicariousMedia releases a new book.