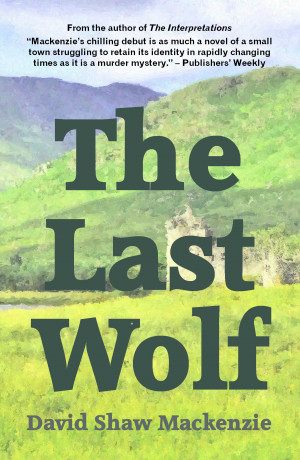 By David Shaw Mackenzie
Moving from 1930s Capri to Paris, London and the Isle of Glass off the Scottish coast, The Last Wolf is a subtly crafted tale of lies and betrayals. More
‘So what is the novelist’s duty then?’

‘Oh, to tell the truth of course.’

But what is the truth when there are at least two sides to every story?

Brothers Maurice and Christopher have not spoken to each other for over 40 years, despite living on the same small island. And nobody talks about Maurice’s first wife, Hester – until an apparently unconnected act of vengeance reverberates across the generations and carefully guarded secrets begin to unravel.

Moving from 1930s Capri to Paris, London and the Isle of Glass off the Scottish coast, The Last Wolf is a subtly crafted tale of lies and betrayals.

David Shaw Mackenzie (www.davidshawmackenzie.com) is from Easter Ross in the Highlands of Scotland. His several careers have led him to various parts of the Middle East, Latin America, Spain and Italy. He now lives in London with his wife, Rachel. These days he spends his time mostly writing fiction and painting pictures of trees.
He is the author of two novels, The Truth of Stone (short-listed for the Saltire Society Best Scottish First Book Award) and The Interpretations. His short fiction has appeared in many literary magazines and anthologies, including New Writing Scotland, Stand, Edinburgh Review, Chapman, News from the Republic of Letters and three editions of ‘Best Short Stories’ anthologies.

You have subscribed to alerts for David Shaw Mackenzie.

You have been added to David Shaw Mackenzie's favorite list.

You can also sign-up to receive email notifications whenever David Shaw Mackenzie releases a new book.