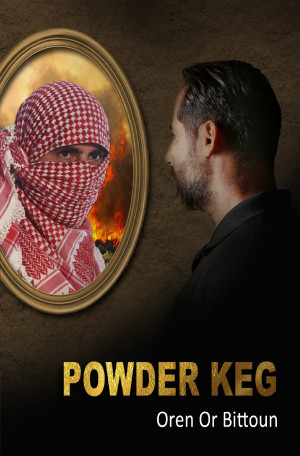 While Bittoun witnesses many harrowing events during his service, his commander’s death is the last straw. After a short debriefing by the army he goes home to commit suicide. He cocks his weapon, points it to his head and recites the Shema Yisrael prayer. The door opens and his mother grabs him screaming, the gun goes off, hitting the floor, and only then does he realize what has happened. He keeps his suicide attempt to himself.

After being released from the army Bittoun tries to escape the memories, living in the Congo, New York, Switzerland, London and Paris before finally returning to Israel with his wife and eldest son.
No matter where he goes, including the Swiss Alps, he carries a gun and a knife, sure that someone is out to kill him. He feels that his body is in Tel Aviv but his soul is in Jenin in the West Bank. He screams out his dead commander’s name in his sleep.
The turning point comes one night, 16 years after losing his commander, when Bittoun comes home from work and has a flashback to that tragic event.

He smells the same smells, the smoke and death, he feels someone grab his neck, he grabs the person back and when opening his eyes he sees that he is strangling his six-year-old daughter. She is turning blue. She screams in panic and asks him why he wants to kill her. Distraught, all he can say is that he loves her and will always protect her. That’s when his wife makes him seek professional help, otherwise she will leave him.

His novel, Powder Keg, is based on his true story which portrays a chilling mosaic of events that will leave readers with bated breath. The book opens a rare window, with a moving, intimate peek into his complex life and the inner workings of the mind and soul of someone suffering from combat related Post-Traumatic Stress Disorder, also known as shell shock. Each night Oren fights a battle of survival against mortal fear, and each morning he chooses to live. From within this seemingly endless cycle of post-trauma, Oren paves the way and shows us a path forward. He stumbles and picks himself up, he fails and succeeds, he fights the powder keg within with everything he's got.
Available ebook formats: epub mobi pdf lrf pdb html
First 20% Sample: epub mobi (Kindle) lrf more Online Reader
pdb
Price: $9.99 USD
Buy Add to Library Give as a Gift
How gifting works
Create Widget
Tags: military ptsd stress traumatic syndrome combat post traumatic stress disorder powder keg
About Oren Or Bittoun

Oren Or Bittoun, 46, married with four children, is a former IDF counter-terrorist operative who operated in the West Bank during Israel’s First Intifada. He has written a chillingly revealing book on his personal battle with Post Traumatic Stress Disorder resulting from the harrowing events he experienced during his military service. Unaware of the disorder, which was unrecognized by the military at the time, he continued living his life with constant flashbacks and nightmares that severely impacted his life, until finally seeking professional help 16 years later. All the while he continued to pursue his career as a top hairstylist, working in London and Paris, while combining extreme sport to relieve his anxieties. Today he continues to run his hair styling salon in Hertzliya while dedicating the rest of his time to raising awareness to PTSD, and helping other army vets seek professional help. Oren recently founded the Trauma4good Association chaired by former Mossad chief, Danny Yatom and tours the world giving talks on his personal victory in fighting PTSD. He has made it his life’s mission to reach out to army vets worldwide in the hope of helping them resume a normal life and preventing the next PTSD related suicide, which stands at a staggering figure of 30 vets a day in the US alone.

Learn more about Oren Or Bittoun

France24 TV Interview with Oren Or Bittoun
France24 TV recently interviewed the author of Powder Keg, Oren Or Bittoun, on his experience as a counter terrorist operative in the West Bank. He talks about the severe trauma he experienced during his service and the emotional scars that remained. Only sixteen years after leaving the army was he finally diagnosed with PTSD, symptoms that were not yet recognized by the IDF.

Reviews of Powder Keg by Oren Or Bittoun

You have subscribed to alerts for Oren Or Bittoun.

You have been added to Oren Or Bittoun's favorite list.

You can also sign-up to receive email notifications whenever Oren Or Bittoun releases a new book.