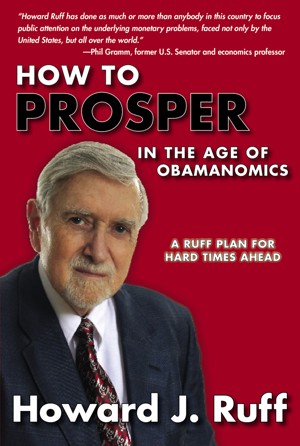 How to Prosper in the Age of Obamanomics: A Ruff Plan for Hard Times Ahead

By Howard Ruff
In this book you will learn: Who is to blame for the current economic mess-- Democrats? Republicans? Wall Street Excecutives? ...or all of the above? What traditional “conservative” investments will be poison and which specific investments can make you rich in these hard times, and how Ruffonomics can help you insulate your family against Obamanomics and socialism.

Howard Ruff has been a fixture in the financial-advice world for 34 years. His book How to Prosper During the Coming Bad Years, published in 1977, is still the world champion.

It is the biggest-selling financial book in history with over 2.6 million copies sold and was on the top of the New York Times best-seller list for two years in both hard cover and paperback.
His newsletter, The Ruff Times, has had over 600,000 subscribers and counting.

Howard says he won’t retire until he has to be hauled off the field of battle on his shield. He sometimes complains, “I have a 35 year-old brain in a 78 year-old body,” and he has never lost his interest in following the financial world and the politics that underlies it.

Howard has been a charming and engaging fixture on every major talk show, including Oprah, Good Morning America, the Today Show, Regis and Kathy Lee, Donahue, NightLine, Wall Street Week,
Crossfire, and others – often multiple times.

He’s a maverick who often strays from the usual Wall-Street crowd.

You have subscribed to alerts for Howard Ruff.

You have been added to Howard Ruff's favorite list.

You can also sign-up to receive email notifications whenever Howard Ruff releases a new book.