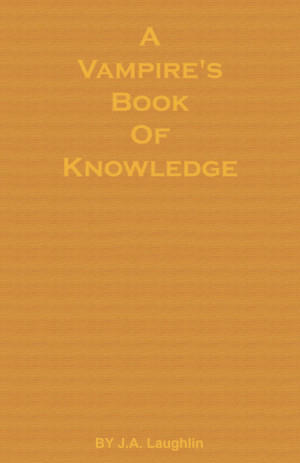 A Vampire's Book of Knowledge

By J.A. Laughlin
Rated 3.50/5 based on 2 reviews
Hectar is a very old vampire, by his own standards. He is also very knowledgeable about his kind, in his own opiniion. This book was written by Hectar to alleviate the problem of young vampires seeking him out to ask questions that most young vampires have. Barring his ego and that some of his "knowledge" is flawed, it's a rather enjoyable read.

I have been writing on and off for more than thirty years. In school my favorite subject and the one I excelled the most in was Literature. For many years I would write, read what I wrote and then burn my work. In the last few years I have stopped the last step of this cycle. Now I keep my writings on my computer and post it to my website at www.cage-den.com.
In my early years I traveled quite a bit. I started out on a farm in North Dakota where I did most of my growing up. I moved to Milwaukee, WI when I was fifteen and experienced a completely different life. I stayed there until I was nineteen when I discovered Renaissance Faires. I met my first wife at a fair and we traveled together until it was close to time for our son to be born. We moved to Green Bay so she could be close to her family. We lived there for a time until our son was about six months old, then we moved to Arkansas.
I have lived in Arkansas since 1992 and have not regretted the decision to be here. My son is now 19 and his mother and I have been apart for many years. In 2006 I met my second wife who should have been my first. I knew right away she was something special to me and boy was I right. We were married in July of 2007 and have been best friends, lovers and confidants since. As a bonus, I added four wonderful stepchildren so that now I have five of the best and most enjoyed children a father could have. As of now (May, 2011) My wife and I have two beautiful grandchildren with one more on the way.
In my time I have had many jobs. I've managed food places, ran a computer repair business, managed distribution for a newspaper, worked at a sawmill, worked as a carbide saw tech, worked as a house keeper at a nursing home and now I'm a Certified Nurse Aide working in Hospice. Through all of this stories have run through my mind.
If I had everything I ever wrote and burned my little house would be jammed with old paper covered with fading ink. What I offer now is material I have written since 2009. I published "Descendats: Vampire Chronicles: A New Species" in 2010 through PublishAmerica. I was very disappointed in the experience, but I had kept my electronic distribution rights in the contract. As soon as I could, I reformatted my manuscript via the Style Guide written by Mark Coker and published "A New Species" and another small book I had been working on called "A Vampire's Book of Knowledge by Hectar" at Smashwords. Unlike my regrets with PA, I have never regretted publishing through Smashwords.
A great thanks and a tip of my hat go out to Mark!
Thanks Mark. You have truly risen to the plight of authors around the world.

Boring. Your average vampire fiction, with a tiny variation in its writing style. I've 'seen' many vampires, and I'm usually sided with the hunters. So, of course I can't say I like this book. Creatures which often need to slaughter human to survive can't be good, at least from the human perspective. And I'm a human.

Written in somewhat Encyclopedia-like book (not really), which is unique. However, I don't find anything different, much less new, in the contents. Sunlight resistance, super-human abilities, immunity to holy objects, justification in crimes... That's the typical vampires after 'Twilight'. Don't expect a 'millenial creatures', which actually think and act like they have spent millions of years on Earth, here.

The small plots are so-and-so and Hectar is just your average vampire (not the oldest, wisest and perhaps among the coolest of vampires).

This book is the BEST book I have ever read that depicts vampires exactly how I see them, and in a way that is perfect. I am a story teller for a game known as Vampires of the Masquerade, and this book perfectly describes all the aspects of the vampires that normally take me many days of game play to explain to players. To note it is placed in the form of an enthralling story that I wait eagerly for the next book this writer will produce. Like I said, this is the only writer that has depicted vampires exactly the way I see them, the only way they make since.

You have subscribed to alerts for J.A. Laughlin.

You have been added to J.A. Laughlin's favorite list.

You can also sign-up to receive email notifications whenever J.A. Laughlin releases a new book.