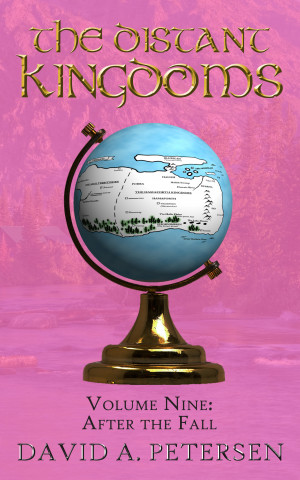 The Distant Kingdoms Volume Nine: After the Fall

By David A Petersen
Rated 1.00/5 based on 1 review
Life continues to move onwards for the peoples of Xerous City. Unbeknown to anyone, victory has been achieved far to the west in the fortress city of Terrimorter where an invading army under the command of Colin Bourke has smashed their way through its defences to secure the safety of all of the hostages including his Royal Majesty, Entell Thellon the Third and his two sons. More
PORRA - The country bordering with the Azzil Territories.

XEROUS CITY – The capital city of the nation of Porra.

LADY PIRA – The reigning monarch of the nation of Porra.

Life continues to move onwards for the peoples of Xerous City. Unbeknown to anyone, victory has been achieved far to the west in the fortress city of Terrimorter where an invading army under the command of Colin Bourke has smashed their way through its defences to secure the safety of all of the hostages including his Royal Majesty, Entell Thellon the Third and his two sons.

Lady Pira, the daughter of the traitorous and now deceased Lord Laninval is maintaining an unsteady hold on the Porran throne. Despite the duplicitous machinations of other people, she continues to rule over the north-western country in a fashion she feels is in the best interest of her subjects. A great many people are united to aid her Ladyship in this cause, including the Archbishop Tennus Fen, the recently promoted Lieutenant-Colonel Inlo Ricc, Captain Werer Few, Colin Bourke’s partner, Jenrin Hul and the two Dearnian guards, Tillisar and Hock.

Together they battle against others who would break apart the civilised society painstakingly built since the arrival of Lord Colin Bourke after his unexpected and quite mystifying arrival on the world of Perencore. At one stage the two senior officers in Xerous City have a falling out which leads to a feud between them, resulting in a duel with swords one early morning. Unfortunately, the duel does not go as planned and both are injured to varying degrees as a direct result of their enthusiasm for the fight. Realising Lady Pira herself is indeed responsible for this outbreak of violence, Inlo Ricc vows never to trust the noblewoman ever again.

Once news of the victory at Terrimorter finally arrives in Xerous via courier bird, a great many events are set into motion. At first the entire population of Porra’s capital city conduct unprecedented celebrations to mark such a historic event and all prior grudges are quickly set aside so everyone can enjoy and participate in the celebrations. The next morning finds a great many of the local people asleep or quite possibly unconscious throughout the city, lying in gutters, the streets, watering troughs for the horses- and anywhere else they choose to succumb to their massive intake of alcohol.

Unfortunately, not everyone residing within the city’s confines are as pleased about the news and son, Pira Laninval must fight to uphold the peace as well as contain the anger of a great many prisoners captured during the recent, abortive raid on the city. Soon after receiving details of the successful invasion, the officers and soldiers interned within the high walls of the Xerous City Detention Centre riot, taking hostages from the staff and thus forcing Pira Laninval to personally lead a battalion to the prison in order to secure their release. Unfortunately, during her Ladyship’s extended mission inside the prison, one of the officers assigned to her detail decides she is in danger and conducts his own raid, placing everyone inside in mortal peril.

In an odd twist of fate, Lady Pira pardons all of the Territorian prisoners and they soon find themselves fighting alongside her in a combined effort to save all of their lives from the incursion of the rebellious military company. Once the rebellious officer has been removed from his assumed position of authority, the prisoners-of-war are indeed released to either journey home to the Azzil Territories or remain behind as new additions to Porran society. Once the situation has returned to its usual calm self, Lady Pira holds a meeting with anyone she feels will, one day, be an integral part of life in not only the city, but the nation itself.

Reviews of The Distant Kingdoms Volume Nine: After the Fall by David A Petersen

I have been reading the latest book in the Distant Kingdoms series. And I have to say I am totally underwhelmed ! This is garbage! The other books were telling a good story , although some of the characters were somewhat silly ,like the king. One minute going to kill you the next who knows! But I found the premise of the story intriguing, the kind of story I like. But the ninth goes of entirely in another direction... None of it makes sense, the main characters who previously appeared well grounded , suddenly were going willy nilly , oversexed in all directions. I cannot say how disappointed I am . This does not seem to even be written by the same author. If I could get my money back I would.. This is trash! To rate it 1 star is a crime.

You have subscribed to Smashwords Alerts new release notifications for David A Petersen.