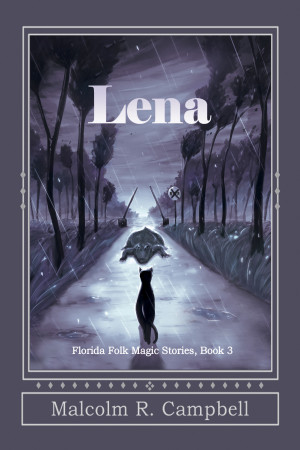 Lena doesn’t think Eulalie is dead, but the conjure woman’s family and friends don’t believe her. Eulalie’s daughter Adelaide wants to stir things up, and the church deacon wants everyone to stay out of sight. There’s talk of an eyewitness, but either Adelaide made that up to worry the police, or the witness is too scared to come forward.

When the feared Black Robes of the Klan attack the first responder who believes the wreck might have been staged, Lena is the only one who can help him try to fight them off. After that, all hope seems lost, because if Eulalie is alive and finds her way back to Torreya, there are plenty of people waiting to kill her and make sure she stays dead.
Available ebook formats: epub mobi
First 20% Sample: epub mobi (Kindle)
Price: $4.99 USD
Buy Add to Library Give as a Gift
How gifting works
Create Widget
Tags: historical magical realism folklore southern fiction cultural heritage
About Malcolm R. Campbell

Malcolm R. Campbell is the author of six novels, including one comedy/satire and six within the contemporary fantasy and magical realism genres. His short stories include the paranormal "Emily’s Stories," "Cora’s Crossing," "Moonlight and Ghosts," and "The Lady of the Blue Hour." A three-story collection of folk tales, "The Land Between the Rivers," is set in the Florida Panhandle not far from the settings used in "Conjure Woman’s Cat."

Campbell lives on a north Georgia farm with his wife and three cats. He grew up in the Florida Panhandle where Boy Scout camping trips, family day trips and dozens of hours spent driving his smoking 1954 Chevrolet from the Georgia border to the Gulf coast introduced him to every river, swamp, sink hole, beach, and all-night diner within an 11,000 square mile area often called “the other Florida” and “the forgotten coast.”

Lena
When Police Chief Alton Gravely and Officer Carothers escalate the feud between “Torreya’s finest” and conjure woman Eulalie Jenkins by running her off the road into a north Florida swamp, the pickup truck is salvaged but Eulalie is missing and presumed dead.

You have subscribed to alerts for Malcolm R. Campbell.

You have been added to Malcolm R. Campbell's favorite list.

You can also sign-up to receive email notifications whenever Malcolm R. Campbell releases a new book.