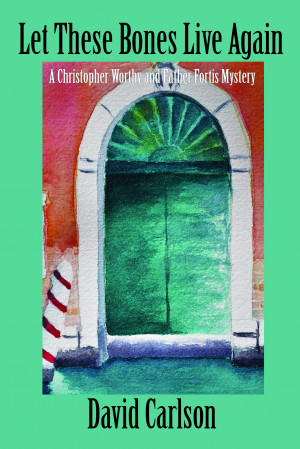 By David Carlson
Allyson Worthy and her renowned detective father, Christopher Worthy, investigate the apparent suicides of two wealthy Americans in Venice. Meanwhile, Father Nicholas Fortis looks into the recent theft of relics from Venetian churches. An unexpected breakthrough reveals a dark undercurrent in the city just as Allyson is unexpectedly put in danger. More
Allyson Worthy, daughter of the renowned homicide detective Christopher Worthy always dreamt of living in Venice. Now, as a college student, she’s landed a dream internship with the Venice police. She assumes she will be investigating minor crimes perpetrated on gullible American and English tourists. On the first day of her internship, however, Allyson is assigned to assist with a more bizarre case—the apparent suicides of two wealthy Americans in the city. Linking the two persons are their similar cancer diagnoses and strange incisions on their bodies.

The family of the second victim, a Detroit automaker, doubts the suicide verdict and hire Christopher Worthy to look into the death. Allyson’s relationship with her father is tenuous, and she resents his intrusion into her dream summer.

After speaking at a conference in Rome, Father Nicholas Fortis is asked by the Vatican to look into the recent theft of relics, bones of saints, from Venetian churches. Father Fortis is happy to offer whatever advice he can to the case Christopher and Allyson Worthy are working on, even as the two Worthys are happy to advise Father Fortis on the stolen relics case.

An unexpected breakthrough reveals a dark undercurrent in the city of canals that changes approaches to both cases. As clues fall into place, Allyson is unexpectedly put in danger as she unknowingly agrees to rendezvous with the killer.

Book 3 in the Christopher Worthy and Father Fortis Mystery Series.

David Carlson was born in the western suburbs of Chicago. His grade school years were spent in Springfield, Illinois, where the numerous Abraham Lincoln sites initiated his lifelong love of history. His childhood hope was to play professional baseball, a dream which died ignominiously one day in high school. He attended Wheaton College, where he fell in love with theological thinking, and earned a doctorate at the University of Aberdeen, Scotland, where he learned that research is a process of digging and then digging deeper. He believes the same process of digging and digging deeper has helped him in his non-fiction and mystery writing. Franklin College, a traditional liberal arts college in central Indiana, has been his home for the past thirty-eight years. David has been particularly attracted to the topics of faith development, Catholic-Orthodox relations, and Muslim-Christian dialogue. In 2007, he conducted interviews across the country in monasteries and convents about monastic responses to 9/11 and religious terrorism. The book based on that experience, Peace Be with You: Monastic Wisdom for a Terror-Filled World, was published in 2011 by Thomas Nelson and was selected as one of the Best Books of 2011 in the area of Spiritual Living by Library Journal. He has subsequently written a second book on religious terrorism, Countering ISIS: The Power of Spiritual Friendships. Much of his time in the last three years has been spent giving talks as well as radio and TV interviews on ISIS. Nevertheless, he is still able to spend summers in Wisconsin where he enjoys sailing, fishing, kayaking, and restoring an old log cabin.
His wife, Kathy, is a retired English professor, an award-winning artist, and an excellent editor. Their two sons took parental advice to follow their passions. The older, Leif, is a photographer, and the younger, Marten, is a filmmaker.

You have subscribed to alerts for David Carlson.

You have been added to David Carlson's favorite list.

You can also sign-up to receive email notifications whenever David Carlson releases a new book.