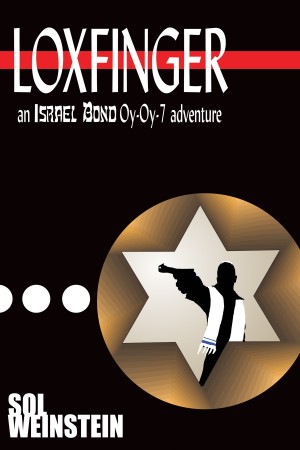 By Sol Weinstein
In a land surrounded by its enemies, Oy-Oy-7 is called on to guard the nation’s great benefactor, the generous but odd Lazarus Loxfinger. Is there more to Loxfinger than meets the eye? Bond aims to find out, even if doing so requires sleeping with dozens of exotic beauties! This classic parody sold hundreds of thousands of copies in the 1960s, now available again. More
In the mid-1960s, when Playboy was serializing the adventures of the world’s most famous superspy, they interspersed them with Sol Weinstein's rollicking tales of the Jewish state’s most hilarious weapon, Israel Bond. After the book editions of what the Chicago Tribune called “probably the funniest secret agent parodies ever written” had sold over a million copies, they were allowed to fall out of print. Decades later, they're back, in new editions with a new editorial polish by the original author.

Israel Bond may seem like a simple-if-sexy salesman for Mother Margolies’ Old World Chicken Soup, but when the Holy Land needs his skills – his quickness with a pun, his second-to-none semitic seduction techniques, and (if absolutely necessary) his abilities at actual espionage – then the man known by the code name Oy-Oy-7 (licensed not only to kill, but to say prayers over the corpse) does what needs to be done.
Download: epub mobi (Kindle) pdf more Online Reader
rtf lrf pdb txt
Price: Free! USD
Add to Library
Create Widget
Tags: jewish humor parody spy
About Sol Weinstein

Writer Sol Weinstein once wallowed in total obscurity. Then in the 1960’s, that turbulent decade of sit-ins, sexuality and spies, he crashed into print via Playboy Magazine and Simon & Schuster editions of his four novels (Loxfinger, Matzohball, On the Secret Service of His Majesty the Queen, and You Only Live Until You Die) starring Hebrew Secret Agent Israel Bond (code name Oy-Oy-7) and now he occupies a giddy new status – semi-unknown.

Some thriller fans suspect Sol, a native of Trenton, New Jersey, may have been influenced a whit and a tad, a bushel and a peck, a smidgen and a widget by the literary output of a Pommy, but Sol swears by all that is ambiguous he has been living in an alternative reality in a galaxy far far away from Onan Lemming, Iam Hemming, or whatever the lady’s name was.

Yes, Oy-Oy-7 was licensed to kill, but his organization also permitted him to maim and even to hurl really hurtful invectives at a foe. If the situation demanded it he could also perform a memorial service over the victim. On one occasion he learned he had just killed an individual who was a practicing Dryad, so he solemnly sang Joyce Kilmer’s “Trees” to the corpse.

In 1961 he penned the music and lyrics to an end-of-the-night ballad “The Curtain Falls,” which Bobby Darin used as his act closer. It’s also been recorded by Bob Hope, Steve Lawrence and Eydie Gorme, Danny Aiello and Oscar-winning actor Kevin Spacey, who, in his role as Bobby Darin, sang the song in the biographical film “Beyond the Sea”.

Sol now resides in New Zealand but continues to fulminate hot concepts with huge marketability. He is currently offering a screenplay that would revive two iconic teen queens: “Gidget and Tammy Rock Out at a Berlusconi Bunga Bunga.” He pronounces a favourite ethnic food as “kiegel”, not “kugel.” (That’s Sol, not Berlusconi.)

You have subscribed to alerts for Sol Weinstein.

You have been added to Sol Weinstein's favorite list.

You can also sign-up to receive email notifications whenever Sol Weinstein releases a new book.