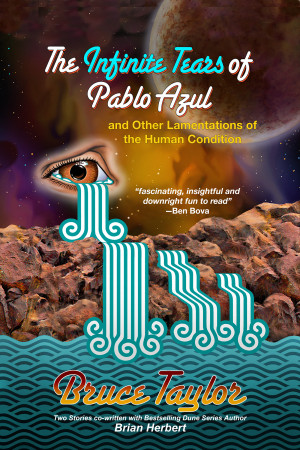 With these stories, written and published from 2010 on, writer Bruce Taylor, also known as "Mr. Magic Realism," takes you on nineteen strange and different journeys of imagination. From relatively straight-forward science fiction ("Darwin's Revenge") to the unclassifiable and surrealistic horror of "Dream Beast II"—from totally wacky humor to wonderful blendings of Magic Realism and Science Fiction, nineteen stories to take you to Elsewhere, Elsewhen. And when you return? Perhaps you come back with a smile, a different view of the world or perhaps a deeper appreciation of just how strange and wonderful the universe truly is.

"A writer of imagination and insight."
—Terry Brooks, author of The Sword of Shannara

"As rich and poetic as Bradbury at his finest."
—William F. Nolan, author of Logan's Run

Bruce Taylor, known as Mr. Magic Realism, was born in 1947 in Seattle, Washington, where he currently lives. He was a student at the Clarion West Science Fiction/Fantasy writing program at the University of Washington, where he studied under such writers as Avram Davidson, Robert Silverberg, Ursula LeGuin, and Frank Herbert. Bruce has been involved in the advancement of the genre of magic realism, founding the Magic Realism Writers International Network, and collaborating with Tamara Sellman on MARGIN (http://www.magical-realism.com). Recently, he co-edited, with Elton Elliott, former editor of Science Fiction Review, an anthology titled, Like Water for Quarks, which examines the blending of magic realism with science fiction, with work by Ray Bradbury, Ursula K. LeGuin, Brian Herbert, Connie Willis, Greg Bear, William F. Nolan, among others. Elton Elliott has said that "(Bruce) is the transformational figure for science fiction."

His works have been published in such places as The Twilight Zone, Talebones, On Spec, and New Dimensions, and his first collection, The Final Trick of Funnyman and Other Stories (available from Fairwood Press) recently received high praise from William F. Nolan, who said that some of his stores were "as rich and poetic as Bradbury at his best."

In 2007, borrowing and giving credit to author Karel Capek (War with the Newts), Bruce published EDWARD: Dancing on the Edge of Infinity, a tale told largely through footnotes about a young man discovering his purpose in life through his dreams.

With Brian Herbert, son of Frank Herbert of Dune fame, he wrote Stormworld, a short novel about global warming.

Two other books (Mountains of the Night, Magic of Wild places) have been published and are part of a "spiritual trilogy." (The third book, Majesty of the World, is presently being written.)

Other published titles are, Mr. Magic Realism and Metamorphosis Blues.

Of course, he has already taken on several other projects which he hopes will see publication: My False Memories With Myshkin Dostoevski-Kat, and The Tales of Alleymanderous as well as going through some 800 unpublished stories to assemble more collections; over 40 years, Bruce has written about 1000 short stories, 200 of which have been published.

Bruce was writer in residence at Shakespeare & Company, Paris. If not writing, Bruce is either hiking or can be found in the loft of his vast condo, awestruck at the smashing view of Mt. Rainier with his partner, artist Roberta Gregory and their "mews," Roo-Prrt.

More books from Bruce Taylor are available at: http://ReAnimus.com/store/?author=Bruce Taylor

You have subscribed to alerts for Bruce Taylor.

You have been added to Bruce Taylor's favorite list.

You can also sign-up to receive email notifications whenever Bruce Taylor releases a new book.