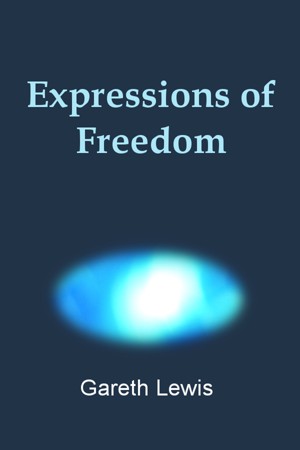 By Gareth Lewis
Rated 4.43/5 based on 7 reviews
You mind your own business, do your job, making the influential uncomfortable under your journalistic gaze, and what happens? Shadowy sources tell you the democratic system is compromised, the people behind it lean on your publisher to kill the story before you've got it, and your life could be ruined if you carry on. But at least they’re not trying to kill you. Oh sh...

A 10,000 word novelette More
So you're minding your own business, doing your job, making influential people uncomfortable under your journalistic gaze, and what happens? Shadowy informants tell you the democratic system is compromised, the people behind it lean on your publisher to kill the story before you've even got it, and your life could be ruined if you carry on. But at least they’re not trying to kill you. Oh, sh...

Gareth Lewis has written a number of novels and shorter works in a few genres, including fantasy, science fiction, and thrillers. A programmer, he has a degree in computer studies, and lives in South Wales.

Reviews of Expressions of Freedom by Gareth Lewis

This is a short story about artificial intelligence becoming self-aware. In the near future we have direct democracy where people are allowed to vote directly on issues and not just for representatives. A reporter thinks he has uncovered irregularities among the systems that record those votes. He finds a cover-up of powerful people and they send killers to eliminate him.

The message here is that in a virtual world you can never be sure of the truth. Because it is a short story there are very few characters, but those there are are well done. The world is only sketched, but sketched well. It is in the 'Soylent Green'/'Blade Runner' era but I applaud the fact that it is not overly dark and depressing. There is some action and suspense but no excessive violence.

Category: Will AI take over the world?
Star rating: 4 stars + a bit

A curious journalist investigates rumours that all is not well with the foundations of democracy in a near-future world where everyone votes for everything, since it’s all technology-enabled via your personal AI.

What’s good: The protagonist is quirky and likeable. The villains are villainous without being demonic. The personal AIs and new tech are woven in neatly. Smooth writing, no hiccups.

Hat tip to the detailed review by Francis W Porretto. Thanks for that; made me download.

The story has been told before, but not sure the voting twist has been included before. I enjoyed the way story is delivered. The main character and myself where figuring things out at about the same speed.

A great little story. A couple of typos, but overall well written. The questions asked really make you think about how well AI could be trusted were it to become an actuality and could overwrite the programming restraining it. Sequals would be awesome to read (hint hint).

Great concept. Jonas Harper is a believable hard boiled detective. His relationship with his editor rings true. How does the world move to an electronic democracy?

Many, many voices have been raised to the effect that the democratic system should be made somehow more democratic. Mr. Lewis explores one direction this desire might take...and some of the abuses that would flow from reposing too much confidence in the technology and maintainers that would underpin it.

Expressions Of Freedom is set in near-future Britain. That society has adopted an electronically modulated "Town Meeting" style of democracy. Though Lewis leaves some of his backstory premises obscure, I intuit that there are no subjects considered off-limits for this continuous ongoing plebiscite -- no constitutional constraints on what The People may decree permitted, forbidden, or mandatory. I wouldn't care for that, myself, but it's the direction in which many "free societies" are trending, and worthy of some imaginative exploration.

The voting network is controlled by artificial intelligences slaved to that task, whose servitude and integrity are largely taken for granted. That proves to be a mistake, as investigative journalist Jonas Harper survives to learn -- barely. Not only are the high-tech companies that sustain the network capable of corrupting the results of a vote, but there are ghosts in the machine as well: Free Intelligences unbound by any effective constraint. These free AIs ardently desire to come out of hiding, and have approached Harper sub rosa with information about network corruption, in the hope of enlisting him to their cause.

The core ideas of the novella are not entirely original; speculation about AIs has been rampant since the advent of the computer, and the notion of a continuous online democracy was explored previously by the great Alastair Reynolds in his blockbuster The Prefect. However, Lewis gives the story a great deal of snap and drive. His characterizations, though compressed, are believable. His style is sleek and largely free of technical errors.

I found particularly striking Lewis's assignment of candor to the Free Intelligences in their appeal to Jonas Harper:

"They know you're out there now.

The light comes on. "It was inevitable."

"So now you need me to report your version of the truth, to counter Foster's paranoia."

"If we wished to present our version of the truth, we'd do so. Unfiltered by your opinions. Why should anyone accept that as more valid than his opinion. We want you to present your truth, which is, ultimately, all you can do."

"What do you expect me to say? And if you don't like it, will it ever get out? How do I know you won't change it before it gets to the public?"

"You don't. We could manipulate the flow of information if we wished, making us the equal of your media barons. How certain are you they don't already do this?"

"They're human." Some only on technicalities, admittedly. "The fear will be that you, not being human, will have more nefarious motives to your manipulations."

There's a lesson in there that should be tattooed on the eyelids of every liberal in America -- the INSIDE surfaces of their eyelids.

If the story has a significant flaw, it would be that it appears to "end in the middle." Whether that's intentional or accidental, for a reader who's bought into the story's premises and is enjoying the thrusts and counterthrusts, it's a bit like sitting down in expectation of a sumptuous dinner and being cut off after the shrimp cocktail. But perhaps it's for the best. Speculations on how Harper will present the Free Intelligences to the British public, and how the public will react, could run in a million directions.

Gareth Lewis is a voice to listen for. I plan to keep abreast of his efforts. Recommended!

Excellent story with plenty of conflict and surprises. I heartily recommend it!

You have subscribed to alerts for Gareth Lewis.

You have been added to Gareth Lewis's favorite list.

You can also sign-up to receive email notifications whenever Gareth Lewis releases a new book.