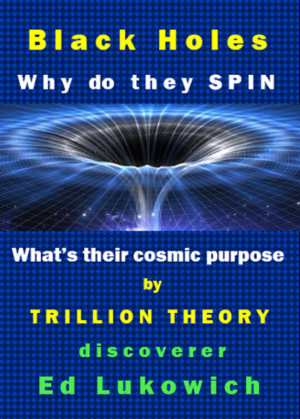 Black Holes: Why Do They Spin

Ed Lukowich, is a Canadian cosmology writer of a new enthralling non-fiction universe theory entitled Trillion Theory series, which consists of 5 book in the series, comprised of: Trillion Theory (1st book); Trillion Years Universe Theory (2nd book); Black Holes Built our Cosmos (3rd book); T Theory Says: Who Owns Our Universe (4th book) and Spinning Black Hole Inside Our Earth (5th book) in the completed Ed Lukowich cosmology series. Added to the 5 book series is Ed's latest TRILLION THEORY summary book entitled 'Supermassive Ancient Galaxies', which is available as a FREE download.
Ed is also the author of a super futuristic sci-fi novel entitled The Trillionist (under pen name Sagan Jeffries) which depicts the despicable actions of an older-than-dirt entity which deviously manipulates its planet along a path to disaster.
Ed is a former World and Olympian curler and National Coach turned sci-fi cosmology writer. See website www.trillionist.com for all of his cosmology and futuristic paperback books and e-books.

You have subscribed to alerts for Ed Lukowich.

You have been added to Ed Lukowich's favorite list.

You can also sign-up to receive email notifications whenever Ed Lukowich releases a new book.