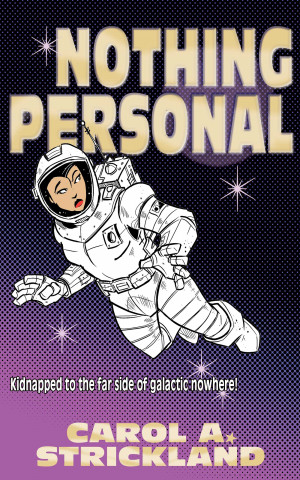 By Carol A. Strickland
Adult

One day Tam is waitressing at a neighborhood tavern and taking community college classes in firefighting. The next… Well, months later when she finally gets her sight and hearing back, after waking up in a hospital… She’s living on a county-sized space station, one of the few humans in a community made up of giant, sapient lizards and birds.

Her next-door neighbor is a MUTANT giant, sapient lizard. Her new Station Safeties supervisor doesn’t think a mere mammal can handle the job. And her boyfriend wants her to help with illegal drug running.

What’s a girl to do? Except keep her new eyes and ears open to find the bastard who stranded her here and knows the way home…

When you think of strong women and strange worlds, think Carol A. Strickland.

Although born in a small town in Illinois noted for its Nineteenth Century demonic possession cases, Carol claims that all those voices inside her head are a result of having stories to tell and books to write. Even so, her strange devotion to and study of Wonder Woman would seem to indicate an abby-normal brain.

A one-time comics letterhack and outspoken member of various comics message boards, Carol has found herself the basis for two comic book villains (at times her opinions have not been taken well by the books' creators) (both villains were soundly thrashed) (and both, for some perverse reason, were male) and had one superhero wear her costume design. (Light Lass!)

Carol has also become an award-winning painter. Along with her writing, she exercises this skill in her secondary hours (both of them) as she waits for the lottery to free her 9-to-5 time to more fulfilling pursuits.

You have subscribed to alerts for Carol A. Strickland.

You have been added to Carol A. Strickland's favorite list.

You can also sign-up to receive email notifications whenever Carol A. Strickland releases a new book.