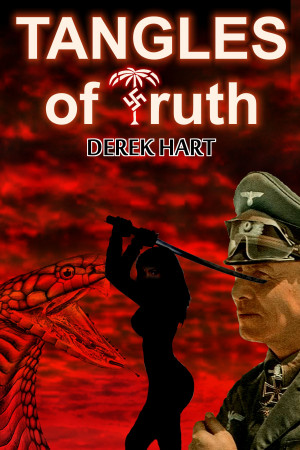 Tangles of Truth, by Derek Hart, is a new historical fantasy novel set in North Africa during the early years of WWII. Once again, after exhaustive research into the author's ancestors in Europe, an explosive and exciting story evolved. More
Tangles of Truth is a historical fantasy novel set during the early years of World War II. There is a central sword & sorcery element critical to the story, but the characters are European, intertwined in the events involving their countries in the most horrible war known to mankind. How they react, what they think, and especially what steps they take to make a difference, is what this novel is all about.

Rolf Leutnart is a German staff officer with the famed Afrika Korps and is General Erwin Rommel’s favorite interpreter, fluent in Italian, French, and English. Leutnart is assigned as the primary translator for Italian and German senior officers. While in Tunisia, Rolf meets and falls in love with Lorena Sebesta, an Italian Red Cross nurse. For her, however, the attraction is difficult, since she despises uniforms and especially Germans. However, the relationship grows and soon develops into a torrid love affair, as the war rages all around them.

After the fall of Tobruk, Rolf is approached by several shadowy figures that hint at things more sinister and possibly supernatural in Rolf’s background. He is tied to a birthmark in the shape of a wolf’s head, a secret society known only as the Red Pyramid, and an ancient curse from Egypt that has awaited his arrival for 5,000 years. Rolf’s past arises from the ashes of time, as he takes up sword and axe, to wage combat with demons, giant reptiles, and the wicked sorceress Nefastani. It’s a duel between wolf and snake, as muscle and instinct battle treachery and black magic, with the outcome of WWII hanging in the balance.

You have subscribed to alerts for Derek Hart.

You have been added to Derek Hart's favorite list.

You can also sign-up to receive email notifications whenever Derek Hart releases a new book.