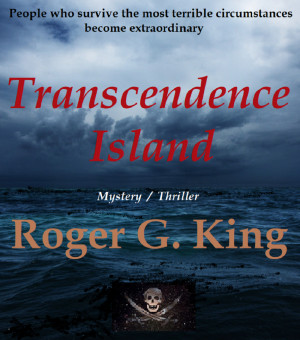 People who survive the most terrible ordeal become extraordinary. Transcendence Island is a fast paced mystery / thriller. More
People who survice the most terrible circumstances become extraordinary.
During the Summer Break after his sophomore year of college a privileged young man goes through one ordeal after another. He survives an accident at sea to awaken alone and adrift. Eventually he is found and taken aboard a boat that has a unique crew. The crew’s codes-of-conduct are centuries old, their boat modern, and their motives and way of life are barbaric.
Transcendence Island is a fast paced novel. Set in contemporary times and written in the first person -- spoiler alert, the protagonists survives -- Walter Alister Bowen III recounts his adventures on the high seas. What will he discover? How will he survive? Who will he become?

Roger G. King discovered his love for writing at an early age. His first work, written at ten-years-old and never published, was a western. The story began with the antagonist riding OUT of the sunset and into the lives of his next victims. The protagonist, no surprise here, was a ten-year-old boy. Educated as an Electrical Engineer, he has pursued a career in Real Estate since graduation. This is his first fiction novel, Affirmative Action, was written in small bits over the span of 22 months. It was finished and first published when Roger was 53 years old. During the intervening 43 years he had started many works, but finished none. He likes to say that time was a "maturation period". but, he admits, that he had to first ignore his fears and press on with his dream of writing novels -- he never conquered them. So powerful was his apprehension he told no one that he was writing. Hiding his nasty habit from his family and friends, he would steal 15 to 30 minutes a day to writing. The first novel, Affirmative Action, was 90% complete before he admitted, or dared to admit, that he had been leading a secret life. His wife asked, "What else have you been hiding?"

Roger G. King's second book, Cross Reference, was published two years later. It is a sequel to the first, but introduced so many new characters and plot lines that it could be considered a stand-alone book. Cross Reference took longer, and more difficult to write than the first novel. He is grateful for all the feedback and was encouraged by the positive reviews, not mention the sales.

His third novel, Transcendence Island is a departure from the first two novels -- each of the prior novels were written in the third person, "God like" perspective. Transcendence Island is a fictional account, written in the first person, of a young man's struggle to find his way through life and extraordinary experiences. The main character returns home during the Summer Break after his sophomore year of college. He is a privileged young man who goes through one terrible ordeal only to be thrust into another. He survives an accident at sea to awaken alone and adrift. Eventually he is found and taken aboard a boat with a unique crew. The crew answers to no higher authority and has codes-of-conduct that are centuries old, their boat is modern, but their motives and way of life are barbaric. The Transcendence is fast paced novel. Set in contemporary times and written in the first person -- spoiler alert, he survives -- Walter Alister Bowen III recounts his adventures on the high seas. What will he discover? How will he survive? Who will he become?
Roger has said that he had more fun writing this book than the others, because he was reminded of his younger days. Times when his brother and he had turned empty refrigerator and washing machine boxes into submarines, battleships and pirate corvettes. Spoiler alert for the third book -- the main character is forced into labor aboard a modern day pirate ship.

Stay tuned for the next novel. He said that a rough outline has been completed. This book will be another departure for him. This time the main character is a women who is swept into a mysterious life... But, he tells us that its too early to say more. Roger is an author who creates from a blank page with only an idea of what he would like to accomplish; he really has no idea how the book will flow or where the story will end up. 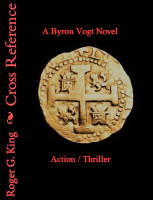 You have subscribed to alerts for Roger G. King.

You have been added to Roger G. King's favorite list.

You can also sign-up to receive email notifications whenever Roger G. King releases a new book.