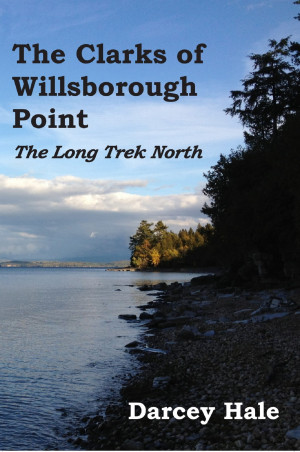 The Clarks of Willsborough Point: The Long Trek North

By Darcey Hale
The Long Trek North introduces us to the Clarks as, in 1801, Lydia and George leave behind all that they had known in the Berkshires and head north to begin a new life on the New York shores of Lake Champlain. The author invites her reader to accompany the young family on their journey, to join George as he builds anchors for the U.S. Navy, and to become part of their lives in their new home and c More
In this, the first book in a series of three, the author invites her reader to come with her on a journey into the past. It begins in the Connecticut Berkshires in 1801 and transports us north with George and Lydia who set forth to Willsborough, New York and, established a family presence in the early days of that town. The lure for George is adventure and a financial opportunity. We experience their emotions as they prepare to leave behind all that they have ever known and begin a long trek north. We join them on the oxen-drawn wagon that becomes home for Lydia and their 4 offspring, including a tiny infant, while George rides beside them as their ultimate protector. We are with them as they brave the elements, wait in fear of the night and wild animals and cook their meager meals and sleep by the roadside.
The Clarks of Willsborough Point: The Long Trek North by Darcey Hale

We board the sail ferry at Charlotte, feeling their trepidation as they stare at the vast expanse of water that lies before them, and, finally, step gingerly onto the warm sand as they reach New York at last. As they enter Willsborough they sigh with relief and as they are welcomed into their new home with loving-kindness. They quickly sense that this is what Willsborough is all about. George takes us into the Iron Shop where we see he and his fellow workers crafting huge anchors for the newly created ocean going vessels of the U.S. Navy. We see the town grow, just as their family grows. The years pass swiftly. They are very busy, productive and happy times for George, Lydia and their children.

Through it all we become a part of their lives as we develop our own perspective as to who these early Clarks really were – one that is often immensely personal. In the end, we are drawn into the final drama of the series, filled with anguish and concern.
Available ebook formats: epub
Price: $9.99 USD
Buy Add to Library Give as a Gift
How gifting works
Create Widget
Tags: united states newyork clark lake champlain history 1800s darcey hale willsboro willsborough
About Darcey Hale

For Darcey Hale, history has been a passion since, as a ten year old, she was introduced to the world of antiquity while residing temporarily among the Mayan ruins of Chichen Itza and Uxmal in Yucatan. This experience was the catalyst for her ongoing quest to learn more about those who had lived in a time gone by. She moved to Willsboro, New York and became the guardian of the treasures that the Clark family had left behind. Through their legacy she has lived their lives and now, in her first book, shares the story of the Clark family, as it so vividly portrays nineteenth century life in New York’s Champlain Valley.

In The Long Trek North, the first book in a series of three, she invites her reader to come with her on a journey into the past. It begins in the Connecticut Berkshires in 1801 and transports us north with George and Lydia who set forth to Willsborough, New York and, established a family presence in the early days of that town.

Reviews of The Clarks of Willsborough Point: The Long Trek North by Darcey Hale

You have subscribed to Smashwords Alerts new release notifications for Darcey Hale.

You have been added to Darcey Hale's favorite list.

You can also sign-up to receive email notifications whenever Darcey Hale releases a new book.