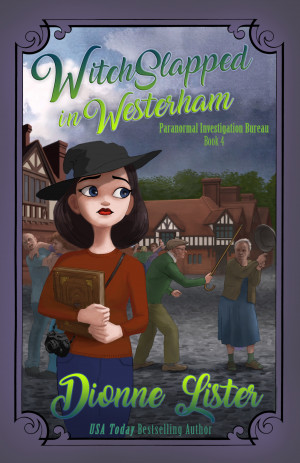 Can Lily use her magic to get to the source of the violence, or will things escalate to the point of no return?
Available ebook formats: epub
Price: $3.99 USD
Buy Add to Library Give as a Gift
How gifting works
Create Widget
Tags: cozy mystery cosy mystery paranormal cozy mystery cozy mystery ebooks witches and mystery
About Dionne Lister

Lily and Olivia become part of an investigation into violent episodes that are only originating with the non-witch population in Westerham. To make matters much worse for Lily, the witch who hates her the most, Dana, an agent with PIB, has everyone under her control. No one can be trusted, even Lily’s brother, James and her mentor, Ma’am.
Lily won’t go down without a fight and discovers she has more power than she, or anyone, knew. Once some are freed from Dana’s mind control, Lily has help finding out what witch started this whole mess and traps are carefully set. There is a great deal of danger for all concerned, including Will, Beren, and Millicent and her unborn child.
Author, Dionne Lister’s Paranormal Investigation Bureau series is not fluff by any means. Although her books are humorous and have that little bit of romance, it’s clear that being a witch is anything but fun and is quite dangerous. Even Lily wonders if her “before” status would have been easier. But, then, she wouldn’t have her new friends and a budding romance as well as the ability to clean up, prepare meals, and travel quickly. You can see that we are finding out how important Lily’s power is, even if she doesn’t know herself.