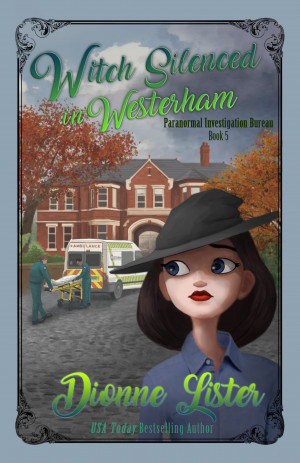 By Dionne Lister
Rated 5.00/5 based on 1 review
An unusual number of deaths at Westerham's nursing home for witches attracts the PIB's attention. Can Lily help discover who's killing the innocent residents before someone she loves suffers the same fate? More
When Will invites Lily to meet his grandmother at the Saint Catherine Laboure care home for witches, she learns the residents have been dying at an alarming rate. Will’s grandmother is scared she’ll be next—but they put it down to the paranoid ramblings of a dementia patient. Until Will’s grandmother dies unexpectedly for no apparent reason….

To find the killer, Angelica volunteers to go undercover, being one of the only older agents in the PIB. Lily’s magic reveals her mentor is in mortal danger, but despite Lily’s arguments, Angelica takes the assignment.

Can Lily use her witchy skills to unravel the mystery before someone she loves becomes the next victim?
Available ebook formats: epub
Price: $4.99 USD
Buy Add to Library Give as a Gift
How gifting works
Create Widget
Tags: humor witches cozy mystery cosy mystery cozy mystery series paranormal cozy mystery
About Dionne Lister

When Will and Lily visit Will’s Gran at a witches nursing home, Lily feels like something is a little off. Will knows his Gran has dementia and her paranoia doesn’t seem so odd to him, although sad. Gran claims her friends are dying all around her and she’s next. When she actually dies and Lily says an investigation should be done, Will and the PIB go along with it. Now that there’s proof of Gran’s murder, Angelica (Ma’am) goes undercover as a patient but not without argument. Lily has taken her picture and Angelica is faded which Lily’s talent shows is imminent death.
In the meantime, a secret investigation into the disappearance of James’ and Lily’s parents is underway along with an investigation to find Dana’s group of dangerous witches who still infiltrate PIB. Everyone is in danger and Lily and Will feel responsibility in their own ways.
We meet new characters one of which realizes Lily is special and is very important for the future. I think we can expect more danger and Lily’s witch growth. This latest addition to the series was down to the last moments suspenseful. Dionne Lister makes this cozy murder mystery series both humorous but serious enough to make you think of what the author has in store for us. I plan to keep reading and enjoying.