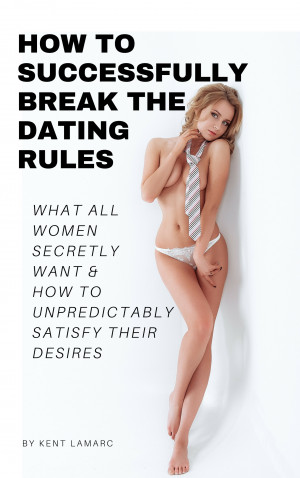 How to Successfully Break the Dating Rules: What All Women Secretly Want and How to Unpredictably Satisfy Their Desires

Kent Lamarc is an Author, Business Owner, Traveler and Researcher, with a vast amount of life experience. He started writing books on dating due to the insistence of his own friends, both male and female, and despite his reluctance to do so. Because he was famous as a playboy but he never saw himself in such way.

The collection of books became extremely successful in a short period of time, and changed forever the way many pick-up artists saw themselves and their own game. Soon after, we saw the speeches and seminars on dating and masculinity changing, and towards a more organic and spiritual approach, exactly as Kent Lamarc had been outlining for decades in his own books. The questioning of the roles between men and women followed, again, matching what the author had done, and abundantly, in his own books.

Many readers on these topics actually claim that Kent Lamarc is the best author on dating out there. And the reason why they say this is not a coincidence either. His books are very complete and give guidance in many important points, namely, related to the meaning of being a man in today’s world, and the importance of having values when dealing with cultural differences.

Voice of America, among other radios, have interviewed him, precisely to get these insights, that they said where not found anywhere else.

Now, why would a man that doesn’t see himself as a pick-up artist, and that doesn’t want to attract attention to himself as a dating guru, write so many successful books about these topics? The reason is that he is merely a researcher trying to help other men find happiness.

His books are based on the direct observation and research of the techniques used by the many pick-up artists and playboys he personally met. This knowledge was then correlated with the information provided by the many women he knew. And finally, it was tested, allowing him to find girlfriends in a short period of time, reason why he is famous wherever he goes.

He can entertain a conversation with all the women in a group without any difficulty, and he can also make a woman that hates him want to sleep with him. And he does these things with such ease that, to the bystanders, it seems that he has magical powers. In fact, he can also start a relationship with a woman who is 20 years younger than him in just a few hours, he can get kissed in the mouth by girls in clubs without speaking any words, and he has dated women from several different cultures. But more importantly, he did all this without the explicit intention of doing it. He simply knew what to do in specific situations. He is what is called “a natural”. His techniques are meant to be fast, simple, and direct. So fast, simple and direct, that men don’t see it happening, even when it happens in front of them.
In short, Kent Lamarc is an expert in human behavior, and has done is best to understand seduction in the most natural way. If you read his books, you will not just become better at seduction. You will become a better man for yourself and for society in general.

You have subscribed to alerts for Kent Lamarc.

You have been added to Kent Lamarc's favorite list.

You can also sign-up to receive email notifications whenever Kent Lamarc releases a new book.