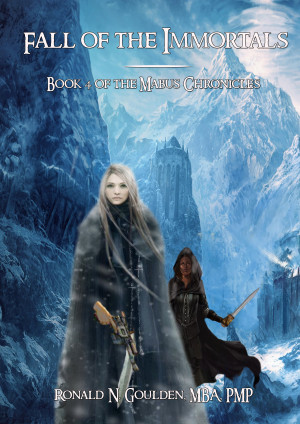 Fall of the Immortals

By Ronald N. Goulden, MBA, PMP
In a world suffering from ‘nuclear winter’ where temperatures are constantly well below zero and the night time temperatures are lethal, a young girl, Snap, must use her wits to survive in the midst of those who have defied death and aging; and were impervious to the lethal climate of her world. More
A Galactic Princess, the adventuress, the beauty, the twin robots, the werewolf, the two high witches are joined by two other females, a vampire and a village girl join forces to renew the battle they lost against Mabus. The Immortals waged war against Mabus, but were defeated. Half of them remain imprisoned in their cells in Mabus’ palace. The others escaped and were scatted across the surface of the joined worlds.

Of the ten women, only young Snap is mortal, measuring time in days rather than centuries. However, the mortal girl brings an ability that may help reunite the Immortal women, allowing them to revisit their war against the tyrant Mabus.

In a world suffering from ‘nuclear winter’ where temperatures are constantly well below zero and the night time temperatures are lethal, young Snap must use her wits to survive in the midst of those who have defied death and aging; and were impervious to the lethal climate of her world.

The sky, sun, and stars have not been seen for five generations and the snowfall is constant, creating a grey backdrop to the lives of the inhabitants who struggle to survive the Mabus mandates and the deadly climate. The concept of color is virtually unknown to the denizens of this world, and there are no stars or magnetic poles to help navigate. Landmarks are vague and obscured by the constant snow.
Available ebook formats: epub mobi pdf lrf pdb txt html
First 15% Sample: epub mobi (Kindle) lrf more Online Reader
pdb
Price: $0.99 USD
Buy Add to Library Give as a Gift
How gifting works
Create Widget
Tags: vampire robot werewolf nibiru ice age mabus
About Ronald N. Goulden, MBA, PMP

Ronald Goulden has written novels and stories for thirty years. Having served in Viet Nam as a Translator/Interpreter, He quickly adapts to new cultures and sees a story or an adventure everywhere. He has ‘dabbled’ in witchcraft, though he is not a witch.

All of his novels and stories have interconnecting threads that link them into a larger universe, spanning space and time. Some of the links are obvious, while others are very subtle.

Some of the events in the stories are based on real life, while others are pure fiction. The distinction between fact and fiction is up to the reader.

Having studied witchcraft many years earlier, it had always been in my mind. When I became an IT Director for the Farm Credit bank system in Wichita, I observed the ‘power’ a small group of ladies expressed over others in the bank and their general disdain for many of the men.

I had also researched the BTK Killer during his spree and developed a program that allowed me to ‘predict’ his next attacks. As such, I saw the potential for violence in anyone.

After being treated rather rudely by the band of bank beauties, I decided to write a story to explain their odd and overbearing personalities. Using newspaper stories and personal experiences, I settled on baby sacrifices and Satanism.

While the personalities and physical attributes are based upon real people I knew at the time, their involvement is this story is purely fiction. There are many ‘links’ in this story to the other novels I’ve written over time, essentially building an alternate universe.

Reviews of Fall of the Immortals by Ronald N. Goulden, MBA, PMP

You have subscribed to alerts for Ronald N. Goulden, MBA, PMP.

Would you like to favorite Ronald N. Goulden, MBA, PMP?

You have been added to Ronald N. Goulden, MBA, PMP's favorite list.