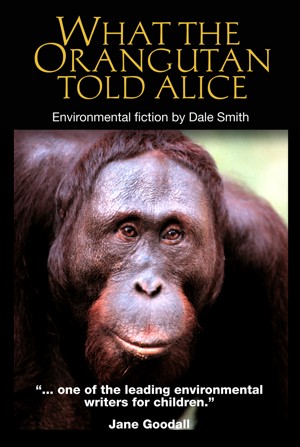 What the Orangutan Told Alice

By Dale Smith
When two American teens visit Indonesia, they follow a gibbon into a Borneo rain forest where they meet orangutans threatened with extinction. They meet scientists working to save them. And… they learn how young people can make a difference in the world.

“… one of the leading environmental writers for children…” -- Dr. Jane Gooda More
When Alice and Shane, two American teenagers who are visiting Indonesia, follow a gibbon into a Borneo rain forest, they meet orangutans and other forest dwellers threatened with extinction. During their adventure they meet scientists working to save them. Alice and Shane visit an orangutan rehabilitation center and learn how ex-captive orangutans are rehabilitated and returned to their natural habitats. And deep in the forest they encounter the mythical “Old Man of the Forest” who challenges their right, as human beings, to even inhabit the earth. And… they learn how young people can make a difference in the world.

In 1969, young men of draft age had two options: either fight an unpopular war in Vietnam, or immigrate to Canada. This is the story of a young man who chose Canada.

When twenty-year-old draft dodger Scott Yale Knight crosses the Canadian border with his girlfriend and her toddler daughter, he is full of idealistic enthusiasm and hope for their future. As he struggles to establish a homestead for his family in the Canadian wilderness, he comes face-to-face with natural and psychological forces intent on shredding his youthful ideals and defeating his innocence.

DALE SMITH ON WHY HE WRITES ‘ENVIRONMENTAL FICTION’

In a few years, the children on the playground down the street will have joined the workforce. Some of them will find themselves working for corporations or governmental agencies, sitting behind desks in positions of responsibility and influence, making decisions that will, for better or worse, affect the ecological health of the planet. My goal in writing these books is to plant the seeds of environmental responsibility, giving today’s kids something to think about before the future arrives.

These well-researched, easy-to-read “environmental fiction” books are written for middle and high school students. What makes the books unique is that kids hear from the endangered species themselves. The books entertain readers with engaging stories while educating them about how and why a species becomes endangered and what they can do to help. The chapters are short, providing kids who don’t particularly enjoy reading with a sense of accomplishment.

WHAT THE PARROT TOLD ALICE
Ten-year-old Alice’s view of the world is changed forever when her pet parrot starts talking. Written for fourth graders and up, this book uses wild-caught and domestic parrots to deliver a powerful, inspirational message about conservation and the environment.

WHAT THE ORANGUTAN TOLD ALICE
Alice and her foreign exchange student friend Shane venture into a Borneo rain forest where they meet endangered orangutans threatened by habitat loss and the illegal pet trade. Jane Goodall calls Dale Smith "… one of the leading environmental writers for children."

WHAT THE TORTOISE TOLD ALICE
In a dusty trailer park near Las Vegas, recent high school graduate Alice and Creach, her eccentric but down-on-his-luck uncle, use solar technology and creativity to invent a product to help bolster Creach’s failing ‘Lizard Maintenance’ business. Alice and Creach soon realize what role their invention will play in helping save the endangered desert tortoise from extinction.

ABOUT DALE SMITH
Writer and photographer Dale Smith lives in Nevada City, California where he writes ‘environmental fiction’ for Young Adult readers. His daughter, Alice, has been his inspiration and muse for his three ‘Alice’ books. In his spare time he explores the American Southwest and Mexico’s Baja peninsula in his small RV with his Scottish terrier, Cooper, riding shotgun. 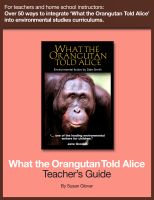 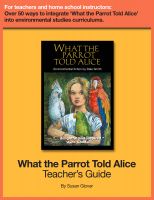 Reviews of What the Orangutan Told Alice by Dale Smith

You have subscribed to Smashwords Alerts new release notifications for Dale Smith.

You have been added to Dale Smith's favorite list.

You can also sign-up to receive email notifications whenever Dale Smith releases a new book.