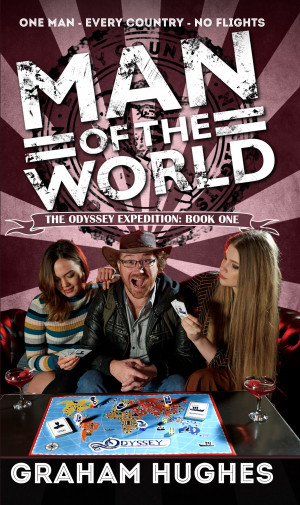 Man of the World: Book 1 of The Odyssey Expedition

Buckle up for a rib-tickling multinational caper of courage, tenacity, love, friendship, danger, panic, passport stamps and geo-politics, washed down with copious amounts of alcohol.

The Odyssey Expedition is the true story of the first successful expedition to every sovereign nation on Earth without flying by famed travel adventurer Graham Hughes! The expedition spanned 1,492 days (that’s over 4 years) and over 220 countries and territories (all 193 members of the United Nations and then some). He did it alone, on a shoestring budget and with no professional support (save that of his incredible friends and family). Along the way he made an eight-part TV show for Lonely Planet which has been shown around the world on the National Geographic Adventure channel and the Travel Channel. And he even set a new Guinness World Record (in fact two).

“Man of the World: Book 1 of The Odyssey Expedition” covers the first year of The Odyssey Expedition, beginning in Uruguay on January 1 and ending 138 countries and territories later at the Egyptian pyramids on December 31. Highlights include being arrested on the Russian border, braving a leaky wooden canoe over 600km of open ocean and two stints in two separate African jails!

Graham David Hughes is a British adventurer, filmmaker, television presenter and Guinness World Record holder. Hughes was the first person to visit all 193 United Nations member states and several other territories across the world without flying. He did so over a period of nearly four years and completed the task in November 2012. While on his journey he presented the television program Graham’s World on the National Geographic Adventure channel, a weekly look into his ongoing quest to break multiple world records by visiting every country on earth without flying.

Reviews of Man of the World: Book 1 of The Odyssey Expedition by Graham Hughes

You have subscribed to alerts for Graham Hughes.

You have been added to Graham Hughes's favorite list.

You can also sign-up to receive email notifications whenever Graham Hughes releases a new book.