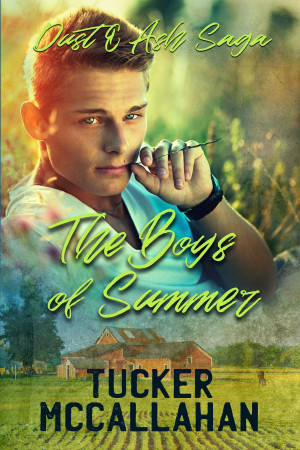 The Boys Of Summer

A Cancer born in early July, Tucker (they/them) is a tri-state river rat, born and raised where Ohio, West Virginia, & Pennsylvania meet. In addition to fostering an early love for cemetery tailgate parties, trooper tag, muscle cars, indie rock, & Lion's Den adult stores, Tucker also discovered an equal love of boys & girls at an age that would make most people blush. Determined to bust out of the rolling hills of Appalachia, Tucker devoured every book available, developing an intense addiction to outlaw and genre fiction. After a brief, failed stint as a gonzo journalist, Tucker invented “Gonzo Smut” and has been happily penning mixed-genre erotic romance ever since.

Tucker travels extensively and has a resume that looks like an exercise in espionage & identity theft. They know a little bit about everything, and like Hermione Granger, they're an insufferable know-it-all. When not staying up all night, texting like a fiend, or, of course, writing, Tucker can be found playing any number of table-top role-playing games, though it’s a good bet it’ll be second edition Dungeons & Dragons, and Tucker will be wielding the FINGER OF GOD as the resident Dungeon Master.

Reviews of The Boys Of Summer by Tucker McCallahan

You have subscribed to alerts for Tucker McCallahan.

You have been added to Tucker McCallahan's favorite list.

You can also sign-up to receive email notifications whenever Tucker McCallahan releases a new book.