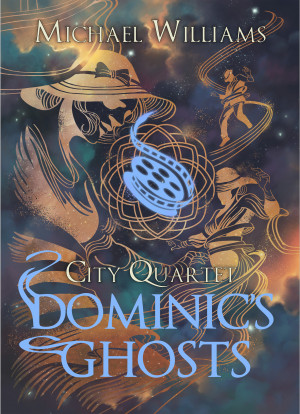 Over the past 25 years, Michael Williams has written a number of strange novels, from the early Weasel’s Luck and Galen Beknighted in the best-selling DRAGONLANCE series to the more recent lyrical and experimental Arcady, singled out for praise by Locus and Asimov’s magazines. In Trajan’s Arch, his eleventh novel, stories fold into stories and a boy grows up with ghostly mentors, and the recently published Vine mingles Greek tragedy and urban legend, as a local dramatic production in a small city goes humorously, then horrifically, awry.

Trajan’s Arch and Vine are two of the books in Williams’s highly anticipated City Quartet, to be joined in 2018 by Dominic’s Ghosts and Tattered Men that will be published by Seventh Star Press.

Williams was born in Louisville, Kentucky, and spent much of his childhood in the south central part of the state, the red-dirt gothic home of Appalachian foothills and stories of Confederate guerrillas. Through good luck and a roundabout journey he made his way through through New England, New York, Wisconsin, Britain and Ireland, and has ended up less than thirty miles from where he began. He has a Ph.D. in Humanities, and teaches at the University of Louisville, where he focuses on the he Modern Fantastic in fiction and film. He is married, and has two grown sons.

You have subscribed to alerts for Michael Williams.

You have been added to Michael Williams's favorite list.

You can also sign-up to receive email notifications whenever Michael Williams releases a new book.