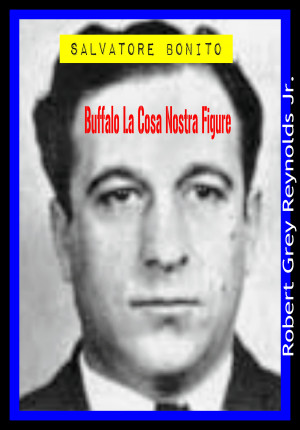 By Robert Grey Reynolds, Jr
On December 9, 1967 Salvatore Bonito was one of forty-six men arrested in a police raid on Buffalo's Chicago Street Club. Police also seized Magaddino capos Sansanese and Cammillieri, as well as Bonito's fellow soldier Vaccaro. Many of the persons taken into custody in the sting were a mix of burglers, armed robbers and bookmakers. Originally from rural Depew, New York Bonito was a section leader. More
Salvatore Bonito became a soldier in the Stefano Magaddino crime family of western New York. Based in Niagara Falls and Buffalo, the crime outfit's operations extended to Ontario and the Ohio Valley to the west. Bonito began his life in crime with a vagrancy charge in November 1935. Nicknamed "Georgie Raft" Bonito, was one of five men arrested in a counterfeiting operation. Federal agents and local police broke it up in April 1937. The ring flourished in an area from Ohio to Boston in the east. Later in his life Bonito was associated with gambling, particularly horse track betting.