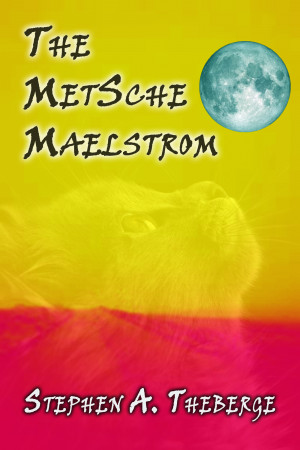 By Stephen A. Theberge
Adult

A rogue MetSche hybrid desires to cruelly rule Earth. Min, a kindly hybrid in cat form, tries to aid Andre, the human recipient of a previous alien message. And what of the planet with the yellow sky and turquoise moon? In this sequel to The MetSche Message, the author presents us with a true maelstrom of emotions and conflicts. Journey with him to the surprise ending for all the main characters. More
As the story begins, there is deep discord in the MetSche Alliance. In addition, a rogue MetSche hybrid, Padma, is determined to escape her place of birth and rule Earth with the cruelty that she herself experienced in youth. Andre, the human recipient of the profound MetSche message that was delivered in the prequel to this book, is wracked with guilt concerning his previous drug addiction, as well as with grief following the death of his long-time lover, John.

Attempting to come to his aid is Min, a kindly MetSche hybrid disguised as a cat. Andre, knowing that he must have further training before he can seek employment and attain stability, finds himself strongly drawn to the somewhat mysterious Jared at a vision rehabilitation center. Is there any hope for a relationship with him? And what of the beautiful planet with the yellow sky and the turquoise moon? Who are the benevolent but non-corporeal beings who show all this to Andre?

In this sequel to The MetSche Message, the author presents us with a true maelstrom of emotions and conflicts. Journey along with him to the surprise ending for all the main characters, both human and alien.

I was born in Lewiston, Maine in 1963. Shortly thereafter, I moved to Attleboro, Massachusetts with my parents and my siblings, Denyse and Remy.

In 1968, I began attending Perkins School for the Blind in Watertown, Massachusetts as a residential student, graduating in 1982. I enrolled at Rhode Island College in 1982. I graduated from there in 1987 with a BA in computer science and a second BA in English literature, with a focus on creative, technical, and analytical writing.

In the late 1980s through the early 2000s, I tried my hand at my own business, which focused on software for the blind and visually impaired. I have done various types of work in Web testing, computer programming, and usability studies.

I am currently living in Attleboro, Massachusetts. I work for the Massachusetts Bay Transit Authority as an ADA Compliance Tester. I also work for companies as a Usability Tester for the blind and visually impaired.

You have subscribed to alerts for Stephen A. Theberge.

You have been added to Stephen A. Theberge's favorite list.

You can also sign-up to receive email notifications whenever Stephen A. Theberge releases a new book.